So, They’re after weapons now, great. How Evil is Mitsuboshi Colors episode 9?

You heard me right. The girls go to an actual gun store to buy a secret weapon they can use to punish “evildoers.” So the cop they’re always teasing then? Kotoha even points out the nice selection of knives. Aw isn’t that cute? Sacchan apparently wants a bazooka, which makes me remember that little heartwarming scene when they got that fake RPG in the first episode.  Fortunately, the shopkeeper had enough commons sense to not sell them anything. So the girls go to a place that they know they can get “weapons.” Yes, they returned to the old man’s shop.

This time even he doesn’t sell them a weapon. He sells them three walkie-talkies that just happen to be in their colors. The girls seem fine with their purchase too, they immediately test them out. The next adventure had the girls going to visit a shrine. Sounds normal right? They prayed for a Dark Overlord to come and take over their town. It was at that moment disaster struck. The girls spot their thieving cat in the area. after stealthily giving chase Yui discovers that she has lost her hair tie.

The stealth mission heats up as the girls try to tail the cat without being seen. Yui “dies” in the process and the others carry on without her until she catches up. I feel like I need to explain that now. Their little stealth mission had a rule, if you get caught standing in the sun you’re dead.  She broke the rules but no one really cared so it was fine.

She did eventually find her hair tie too. Turns out the cat grabbed it sometime during the chase. I went back and checked frame by frame too. It happens off screen, no little extra details to spot this time. The last part of this episode was just adorable. The girls decide it’s time for them to make a time capsule that they will open ten years from now. 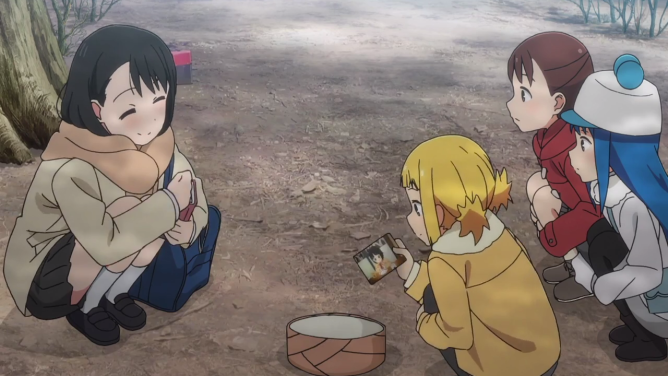 There is one problem, they have no idea where to put it. Originally they decided to bury it near Saito. But he scared them off without really knowing what was going on. I personally would’ve gone to the old guy but the girls went to the park to bury it under a tree instead. That’s when Nonoka showed up.

She convinced them it wouldn’t be a good idea to bury the tin capsule because it would degrade over time. Nonoka suggests that they give it to someone for safe keeping. This leads the group back to the old man’s shop. The girls view him as a landmark within the town. It’s kind of adorable the way the whole thing plays out too. If you want to see that you should watch the episode though. 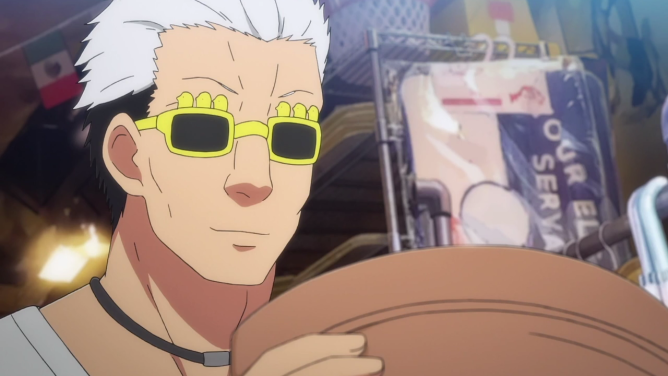 Overall this episode was about as Evil as a Killer Robot Army (8). Nothing to complain about  It’s a standard cooldown anime at least. If you like mid-tier anime check out CVoyage’s reviews for Black Clover. It’s a mid-tier anime too. Well, that’s all I have for you today. Thanks for letting me waste your time, people.