Yo, dawg, I heard you like setup. So I put some setup in your setup so you can setup while you setup.

“But Civ! What about episode 6?!” Yeah, the whole thing was a recap. Moving on.

Episodes 7 and 8 were honestly what I was expecting at this point. The action is clearly secondary in this series. As evidenced by episode 7’s entire first third, which was dedicated to some Endo-household bonding and then an extended board meeting that basically just sets up the guy I have to assume is the villain. It conveys a lot of information that honestly isn’t all that interesting and, much like the last episode of Toji ni Miko, doesn’t really offset it with anything all that engaging or amusing. It’s just a bunch of business people, presumably involved in all of this, bickering about the androids. 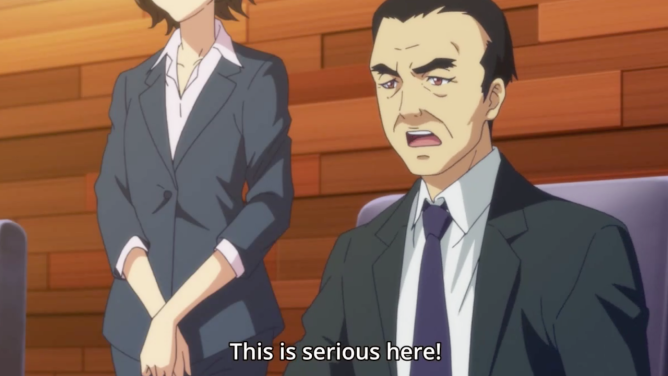 Indeed. A serious chore to sit through.

We do, however, learn that the sister of one of Arato’s friends, is essentially being used as sort of a diplomatic pawn. And that is honestly a really interesting parallel. They’re more or less trying to marry her off. But come to find out, she’s simply not interested in any of the candidates they keep pushing at her. And why is this? Turns out, she has a crush on Arato. I’m… not really certain the backstory to this, though it’s clearly significant as it’s emphasized a lot in both episodes. In fact, it promises to be a pretty significant plot point in what I think will, unfortunately, be a thread with a very tragic end.

Later in episode 7, her brother winds up meeting with the guy who’s totally the villain. But I’m honestly not certain about all of what was going on. The creep just played mind games with the kid for a bit. Which was awkward enough, they get into a vague philosophical back and forth.

Well, can you make your way of thinking closer to human? You’re not making sense!

Cut to a gala, where the guy’s sister is providing the most intriguing elements of the entire story. The aforementioned parallel about how she’s essentially being used like a doll. A tool. A means to an end. Yet this is a world where there are androids walking around. It’s a really intriguing subject that I do hope they’ll expand on in future episodes. But for the meantime, she’s approached by one of the last major androids from the incident in the first episode – Methode. I’ll be honest. This woman sets off all kinds of alarms. I have absolutely no idea why anyone would go along with what she’s saying. Unfortunately, the episode also doesn’t do a great job of clarifying the correlation between what Methode is offering and what the sister’s potential motivation for accepting is. And, spoiler alert, the next episode doesn’t really do it either.

Speaking of the next episode, it’s not quite as slow. This seems to be setting up a lot of things, itself. It first establishes the last of the androids from the incident, arriving at the manor of the woman who runs the company where Lacia works as a model. Following this, there’s a little setup for some sort of confusing “Boy Meets Girl” scenario that the agency wants Lacia and Arato to be the faces of. This, of course, unearths all the romantic tension and reduces Arato to a babbling idiot, leading to perhaps the first mutually romantic scene between the two of them. I don’t mean it’s just Lacia doing something with romantic subtext and Arato getting flustered. I mean this:

Seems pretty plain to me.

The hitch is that it… really seemed to just… happen. Quite suddenly, What I’m getting at is that prior to now, Lacia was being waaay more subtle in these little moments. Suddenly she’s being extremely forward. It’s weird. I’m sure she can easily hand-wave this as her “practicing the role.” Heck, she even asks, herself, if Arato thinks she’s analogue hacking him at that moment. He doesn’t answer, but he certainly doesn’t seem to care. So while it’s up in the air whether or not she was being genuine, the suddenness of the moment actually makes it more jarring than sweet.

Unfortunately for them, Arato’s sister catches on (at least to his behavior, not so much Lacia’s) and tells her two friends about it. And one of those friends is Shiori, the girl with a crush on Arato. This, of course, doesn’t really sit well with Shiori. And when she gets home, she contacts Methode to take her up on that deal. Because, as we’ve already established, the human characters in this, Arato aside, really ain’t too bright. 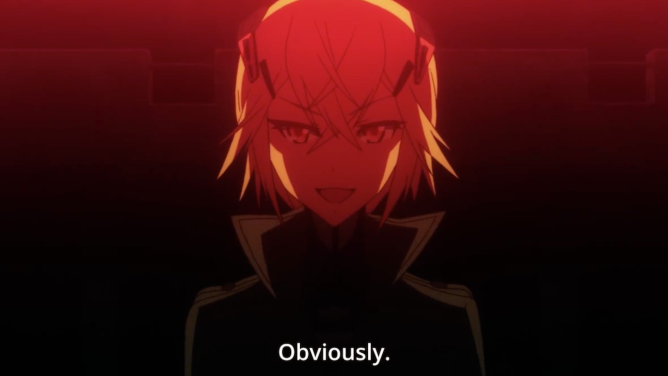 Why? Again. No idea. If we go with the excessive answer, it could be to send Methode after Lacia. But I can’t really picture Shiori doing that. Nor do I really understand why they wanted Shiori in the first place. Clearly, it’s not for anything good. The look on Methode’s face said it all. But I certainly hope she doesn’t wind up meeting some extremely grim fate. Unfortunately, it’s entirely likely she will.

From there we cut to the place where the agency is conducting the first shoot of this new initiative, but Methode interrupts and we get us an action scene that, I’ll be honest, was really cool to watch. It wasn’t flashy or anything. Not a lot of super death lasers, just physical brawling. But the movements were really awesome. It’s here that we also learn Methode is the only android of their type that’s actually complete. Lacia, Kouka, Snowdrop, and the as of yet unnamed one (I know her name, but no one’s said it yet, so I’ll wait)? All of them are merely semi-perfect. 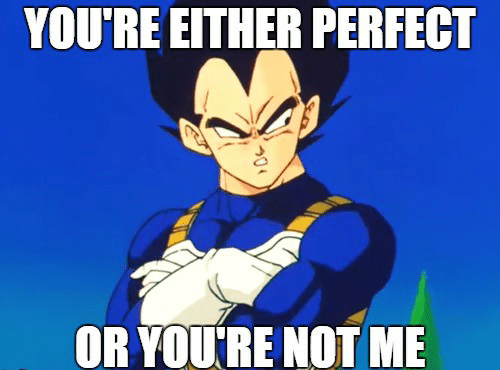 After the action, though, she just… leaves. Once again, the fight has no winner. She hears the cops coming and bolts immediately. One of these days a fight will actually get wrapped up. At least someone will be forced to retreat due to sustaining damage, rather than just casually strolling out. Methode returns to that guy who we basically know, by now, is the villain. They talk vaguely about their ultimate goals and Methode gets into some sort of weird pod. Oddly enough, the two of them almost seem to be competing with one another, despite being owner and subordinate.

Overall, these episodes were… fine. They were Harmless. Not especially engaging, but certainly not bad. There were some interesting ideas. But also a whole lot of really tiresome chatter that wasn’t especially engaging. Here’s hoping all of this setup sees some payoff soon. When this show’s firing on all cylinders, it’s pretty good and intriguing. But other times it’s just kind of underwhelming. Eh. C’est la vie. If you’d prefer something a little more engaging, might I recommend EvilBob’s recaps of Mahoutsukai no Yome. It’s far more enthralling in the long run.

If you’d prefer to stick with interesting sci-fi over the captivating fantasy, Beatless is available on Amazon Prime! That’s all for me, here, folks. As always, thanks for reading. Keep up the awesome.