A father’s love is a powerful thing. 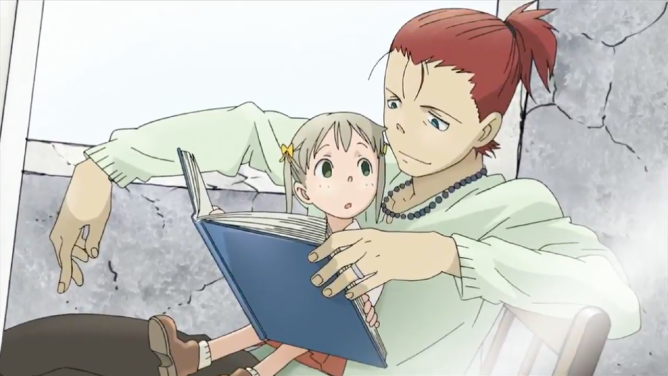 Filler, essentially. But fun filler. And does have a little bit of character building in there. Showing Maka’s dedication to improving isn’t just in getting literally stronger. Also her relationship with her dad.

I love Patty. Have I mentioned that? Normally I don’t care for her character type, but her actual personality being exactly the opposite of what you’d expect beyond being dumb as a brick just makes her so very entertaining to watch. Yes. I am rather simple, that way.

There aren’t really any poignant lines or anything, here, since it’s basically entirely a gag episode. But I thought this little tidbit was cute and a nice way to sort of add some impact to Spirit’s shenanigans in the background of most of the episode.

I mean… how can I really choose anyone among this merry band of total morons? …And Tsubaki and Maka. The episode didn’t have any particular standouts. Though I suppose I can give just a little credit to Spirit or Blair. The former for having the most meaningful contribution to the episode, the latter for having the most consistent comedic impact.

Yup. That’s a wrap, folks! Not really a lot of interesting stuff to say about this one. Um… how well do you think Tsubaki did on her exam since they didn’t show her score? Yeah, let’s go with that. Let me know, down below! Catch ya next time. Keep up the Awesome!