That’s right, we’re now about halfway through the Spring season!

EvilBob: So, we’re almost there, bro.

Ry: Yes we are. And it’s been a pretty good season, too.

EvilBob: I think we’re losing all of our shows, this time. JoJo’s and Dororo are even ending.

Ry: Maybe we’ll get even better ones for next season? 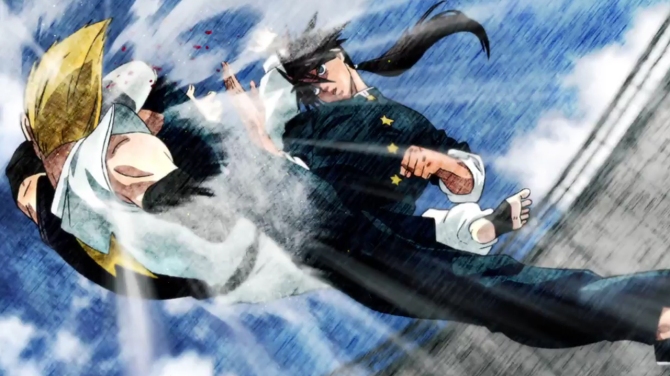 EvilBob: Lightning Max sure got taken out quick. I was hoping for some close battles but it seems like the tournament is a farce, so far.

Ry: Yeah, he got one-kicked. For a show called One-Punch Man, I wanna see more one-punches.

EvilBob: At least Genos got to shine a little. He took out a few monsters without breaking a sweat. 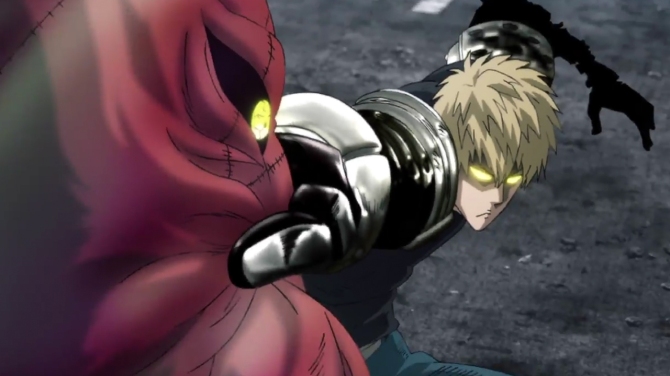 Ry: Well, one question we had from last time did get answered. Last time we stated that the heroes in the tournament were being very irresponsible and such, with all the monsters attacking. But the monsters never reached the area of the tournament. They were all killed by Genos.

EvilBob: Yeah, that was pretty awesome. Although it looks like he may have got taken out again. I kind of feel sorry for any monster that interrupts the tournament.

Ry: With One-Kick Man and Saitama in the same area, anything or anyone trying to attack the place is pretty much going to die.

EvilBob: It may not be painless, but it would be over quickly.

EvilBob: Now I get to talk about my favorite Genos moment. Genos has gotten an upgrade, just in case he has to deal with Sonic again.

Ry: I think someone has a grudge.

EvilBob: Sticky goo, strong enough to stop speedsters in their tracks. How in the world did he get something like that? I thought the guy who gave him that body only worked in robotics/cybernetics.

Ry: Yeah. Who knows what other improvements he might get later? Like hopefully actual good armor that lasts more than an episode.

EvilBob: Good point. Anyway, this episode was fun. I’d say it’s about as Evil as a Villain! (9).

Ry: But Yuki in a dress. That was just wrong. The things this guy sacrifices.

EvilBob: I got to hand it to Yuki, he can really pull off that look. Also, Momiji is a bit of an odd duck.

Ry: Momiji is always hopping around, being hyper. Then we have Hatori. A doctor and, apparently, the guy who has to watch Momiji.

EvilBob: Hatori is also the one responsible for repressing the memories of the people who know about the Soma Clan’s secret.

Ry: Speaking of the Soma Clan’s secret, guess what Momiji turns into to?

EvilBob: That makes too much sense.

Ry: One thing to point out is that they all still have the same hair color in their animal forms so the bunny is blonde.

EvilBob: So… they all turn into their animal counterparts right?

Ry: I wonder who the dragon is.

EvilBob: I dunno. Anyway, Hatori actually showed up with a specific mission in mind.

Ry: To take a picture of Yuki and Kyou. That’s when it finally hits Yuki that he should be worried.

EvilBob: Tohru manages to comfort him but then her own friends add another complication into the mix.

EvilBob: Of course, this is a nightmare for Tohru. If her friends find out the secret they’ll most likely ALL get their memories erased. And there are a few times when Wave Girl scares everyone by calling out animals. I don’t think she knows how close she is when doing these “readings.”

Ry: Shigure’s a writer apparently. And this is the first time Tohru and the audience is learning about it. At least we know what he does now.

EvilBob: And then we got that call with Hatori. Why the heck was that so shady? And he seemed to threaten Tohru to make sure she meets with him alone. I don’t like where this might be going.

Ry: It’s possible they intend to rob her of her precious memories, but I’m not sure at this point.

EvilBob: Overall, this was an entertaining episode with some strong emotional moments that Voyager alluded to in his last Redux, so check that out for a little more info. I’d say it’s about as Evil as a Super Villain! (10).

EvilBob: You’re not dealing with an average demon shark anymore. No, this shark has become the thing that you most fear…

EvilBob: You’re such a killjoy sometimes. But yeah, demon land sharks are a thing.

Ry: Anyway, the thing charges right at Dororo with the ravenous power of a sharknado, and totally misses her, getting a tasty bite of tree and rope.

EvilBob: Unfortunately for Dororo, this thing seems to get faster, the longer it’s on land. It went from barely able to crawl to pouncing like a tiger in just a few minutes. But Hyakkimaru showed up just in time to save her.

Ry: He quickly kills the thing and gains a new leg, then shares a bro moment with Dororo.

EvilBob: Not gonna lie, that was actually cute. That’s a weird thing to say about this show.

Ry: So the moron after Dororo’s treasure ran into a bit of a situation. You see, they checked for traps but they rolled a Nat 1.

EvilBob: So this guy had worked with Dororo’s dad but totally didn’t figure out that there could be traps until after some of his men got blown up. I know the maps are vague but her father wasn’t dumb.

Ry: Traps were not the only hazard on this episode. Behold the fool and his idiot army.

EvilBob: That’s right. Good ol’ Tahoumaru and his legion of idiots have arrived to kill Hyakkimaru and anyone else that’s with him. Yes, that includes Dororo because she’s such a threat to their land.

Ry: Thankfully, sharkman was still alive. And he decides to blow the crap out of the mountain they had been fighting on, causing a massive rockslide.

EvilBob: Sharkman used Rockslide! It’s Super Effective! He managed to kill a lot of Tahoumaru’s samurai and forced the rest to retreat. Also, as an added effect, he opened up the hiding place of the treasure. Dororo proved to be more mature than most of the adults by refusing to take it all now, taking only some traveling money instead.

Ry: Maybe the money might help them fix something later on?

EvilBob: So, I may be wrong but I think the guys they’re fighting, right now, may be a little nuts.

Ry: Nah, it’s completely normal to get a buzz from watching the suffering of others.

EvilBob: I wasn’t even talking about that part… I was referring to one of them acting like a pet. But both do point to them being from Looneyville.

Ry: Yeah. Anyway, their Stand combo is nuts. One Stand infects anyone descending with a flesh-eating mold. And the other one melts the ground, making them descend. It’s a crazy deadly combo.

EvilBob: Speaking of the mold, Bucciarati isn’t affected by it. It can only harm living creatures, and guess who recently got an undead upgrade.

Ry: Yup. I totally called it way back when it was first discovered he couldn’t feel pain. He’s totally a Zombie. But his temporary un-life is fading.

EvilBob: Which is a problem, seeing as he’s the only one that’s immune to the mold. So wait… does that mean Giorno’s Stand is the most powerful so far? It gave someone a temporary reprieve from death.

Ry: That or he just takes after his dear old dad. He was all into the zombie thing.

EvilBob: Right. Anyway, the group managed to escape in a car but that didn’t last long.

Ry: They now found themselves contending with Moldman in a helicopter and his deranged lapdog on the ground.

EvilBob: How can Bucciarati’s group get out of this one?

Ry: There are plenty of anti-mold products that may help in this situation.

EvilBob: Maybe if they can find a Stand based on cleaning products? Are there any songs named after Lysol?

EvilBob: I guess we’ll have to wait till next time for this fight to conclude.

Ry: That’s the downside of covering this weekly. At least it was fun.

EvilBob: It was a fun watch, although I hate having to wait like this. I’d say this episode was about as Evil as Super Villian! (10).

Ry: Shiro is growing on me. A gaming fox? What’s not to like?

EvilBob: She’s fun and Senko’s rivalry with her is just adorable.

Ry: The fact that she cheated to get food was funny too.

EvilBob: And then that maid outfit at the end with even Shiro thinking it was cute. Ah, this show is relaxing.

Ry: Yeah it is. And this time we have two episodes, so right on to the next one.

EvilBob: Oh my god Shin and Sicily are adorable together.

Ry: Loved their reactions when someone finally called them a couple.

EvilBob: Yeah and them not being able to look at each other afterwards was great.

Ry: The entire episode was great even Shin’s shock at certain people’s popularity. 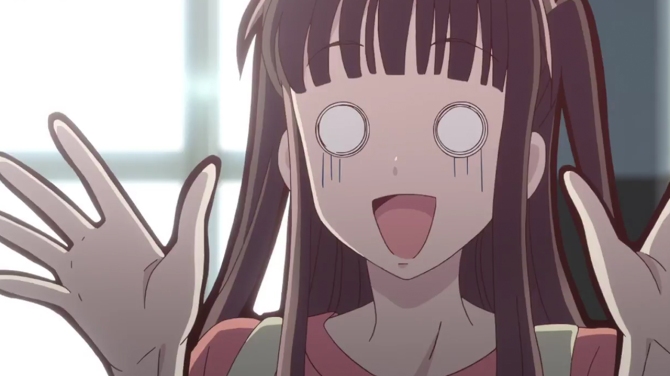 EvilBob: That’s everything for this week, I guess?

Ry: It would seem so.

EvilBob: Well, thanks for letting us waste your time, people.  Check on the site weekly to find out what we’re up to. And Keep It Classy.