It should come as a surprise to absolutely no one that the winner of the Winter 2019 Anime TKO concluded with a fantastic episode that brought everything to a satisfying close. The stuff with Claw was great, but the best part of it all was seeing exactly how far Mob’s come and watching him go head-to-head with someone who embodied the exact opposite of everything he’s worked so hard to become. All the people he’s been lucky enough to have help him and interact with him until now have contributed to who he is today. But Toichiro ascended on his own and came to see himself as the main character of the world. In Mob’s reality, he’s the main character of his life, and his life alone. That clash was fantastic. Especially seeing Mob pushed nearly to the point of forgetting all that and giving in to Toichiro’s cold worldview. This episode truly deserves to be counted among the World’s Finest, as does the rest of the show.

Tate no Yuusha no Nariagari (Episode 13) 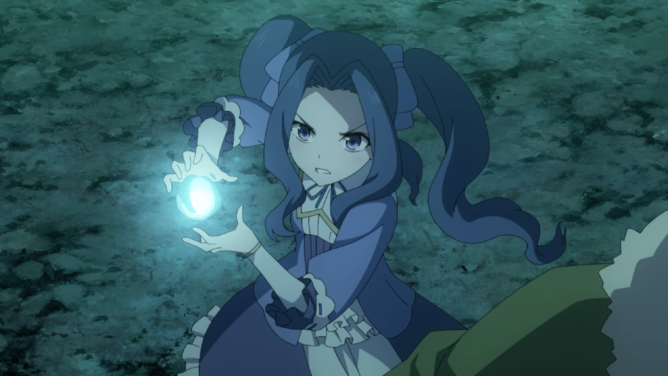 I daresay I’ve grown exhausted with Malty/Myne, whatever we’re calling her now. And I greatly wish they’d hurry up and kill her so we can get to a villain that’s actually worth the space and air, rather than just being an entitled brat. She’s not a good villain. She’s… she’s just not. We’ve thus far been made privy to nothing even resembling depth, regarding her character. She’s just spoiled, entitled, and petty. She’s not charismatic enough to carry that kind of one-note villainy.

Here’s the thing. Malty has a Flat Arc. A Negative one, specifically. She uses her influence and all that to worsen the world around her, all for her own personal amusement and gain (yes, that is literally it. I looked ahead). I understand that. But she just isn’t engaging enough to work on that merit alone. If a character is going to be that one-dimensional, they have to at least be fun to watch in some fashion. Malty isn’t.  She drags the entire thing down. She should’ve been dealt with, by now, so we can move on to bigger, more important things, frankly, “Thank You, Next” style. She doesn’t warrant her influence stretching on for this long. Frankly, she’s just annoying. I don’t love to hate her. I just hate her and want her gone.

But, with that said, the rest of the episode was… fine, I guess. I mean, the action was neat. The Sword Hero continues to not be nearly as much of a tool as the others. And the cast is… honestly still not really growing on me much beyond “They’re okay. Reasonably fun.” But whatever. Junk Food. 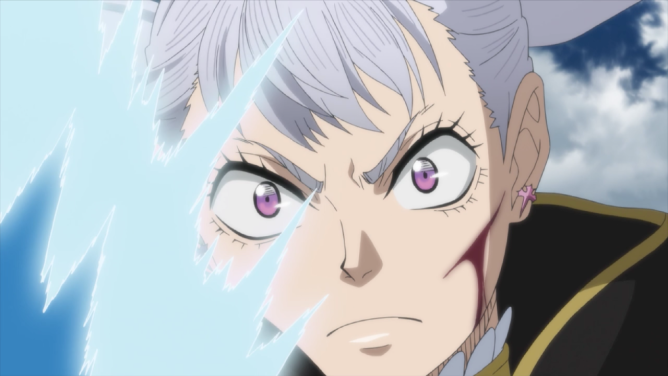 It’s a Noelle episode. Of course I enjoyed this. I’ve said it before and will say it again. She’s the best character in the show. Unfortunately, almost every time it looks like she’s about to step up and do something important, she gets shafted. I’m glad she’s been getting a lot – and I do mean a lot – of good character development, lately. But I hope they let her do something significant on a greater scale at some point soon… and let it stick. That being said, her role in this episode – standing up to her annoying brother – was well handled and I think she really stepped up. This was an episode that showed her strengths as a character splendidly. Also, Yuno was there. Super Effective, in the end. 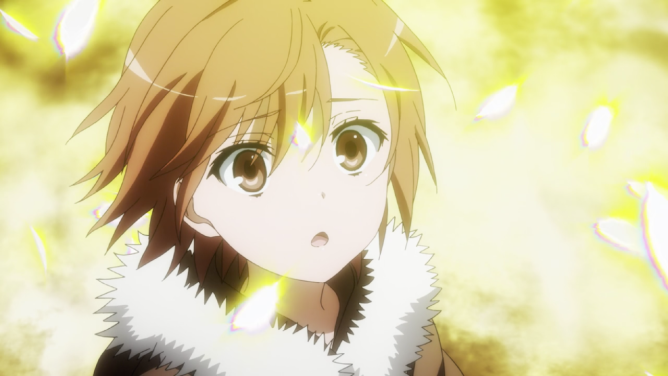 Aw. Accelerator and Misaka Misaka are finally reunited… well… they’ve been physically around one another. But I mean… she’s awake now. And that whole thing was sweet. I’m really looking forward to their spin-off, this Summer. Meanwhile, Touma did Touma things and helped end the war, because of course he did. The cliffhanger of the arc being the end of the season was expected, frankly. And I should warn that you don’t want to expect anything new on that front when the Accelerator spin-off rolls around. So we’ll have to wait for another season of this very show, it looks like. But oh well. Should be fun. I can certainly see people taking issue with this “conclusion,” but I think it wrapped up the current situation sufficiently and did well enough to set up for the future. Reasonably satisfying Junk Food. 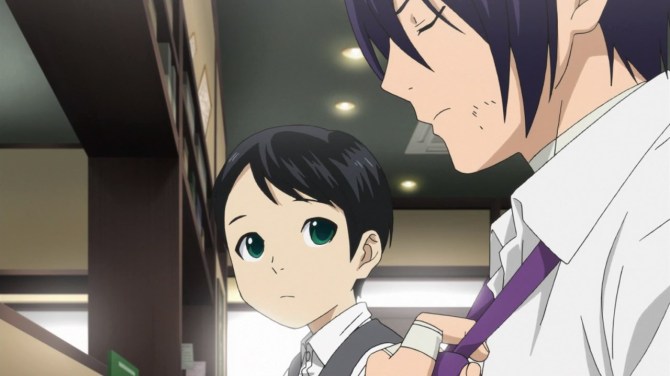 Oof. Seriously, man… Oof. Don’t get me wrong. I figured it’d happen. But man, that stings. All that, and they still couldn’t do anything. But there’s plenty to love about it all. Even setting around the wonderful friendship between our three leads, this episode is honestly how I wish more things would handle reincarnation if they intend for it to be taken seriously. The “you” that you are now and the “you” that you become when you reincarnate are not the same individual. And this one episode illustrated that entire point masterfully after setting it all up perfectly with the adventure in the Underworld.

What’s more, I love how this arc essentially establishes Yato’s whole goal as a character. Remember, he’d basically just been drifting about, fixing things as plot happened to him, throughout the first several arcs. Now he has something to pursue of his own volition and I can’t wait to see what he does, now that he’s got his sights set on something. Alas, another season of the anime may be quite a ways off. Maybe I’ll finally take a look into the manga. Because this one episode has left me thoroughly intrigued. 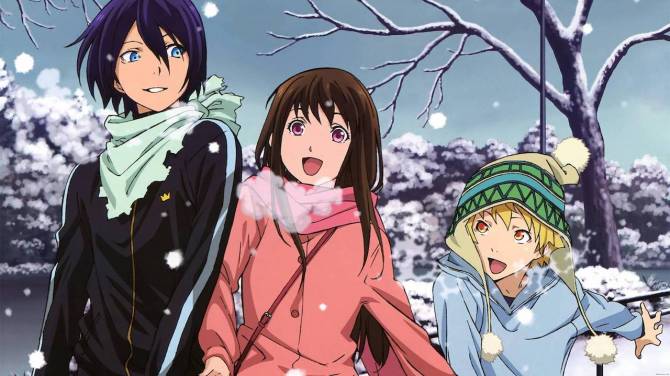 The show, overall, has been amazing. It gave us an incredible cast of characters, including a superbly written friendship between the leads. It’s really good at worldbuilding. And it looks incredible. As I’m sure I needn’t tell you, as pretty much everything Bones does looks immaculate. Noragami is an all-around joy, and stands with the greats as a full-series inductee into The World’s Finest.

Gonna skip the unique achievements, this time as well, just because this was already delayed enough, as it is.

Black Clover taking a Gold Medal is about the last thing I expected. But it happened. It was a solid episode with some really good character development for Noelle. Color me impressed. A Certain Magical Index brings in the Silver Medal, this time. Really, a lot of that just comes down to Accelerator and Touma putting on a good show. And Shield Hero brings home the Bronze, mostly because nothing else was left. Obviously, Mob Psycho 100 would take this, but it was still in the Anime TKO at the time that this was originally slated to go up. So it’s not being included… otherwise it frankly would’ve taken up all three medals.

No surprise here. Noelle was the hard carry of the episode… and her team, frankly. Having read the manga, I know that doesn’t exactly last to the end of the tournament, per se. But it’s still great to see her not only get some long overdue character development, but also another solid crowning moment of awesome. She deserves the honor. She is a royal, after all. 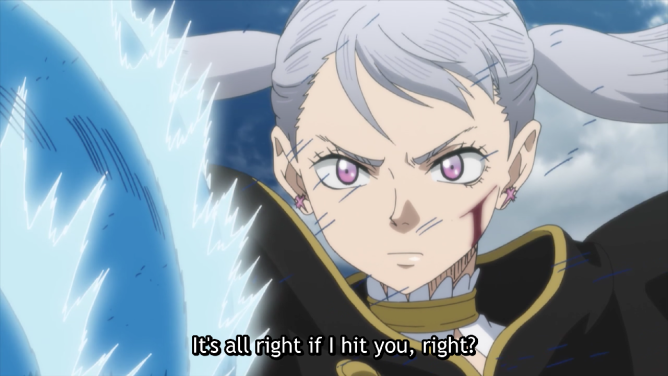 Also. This, right here? This line was absolutely badass.

And that’s it. The last of the holdovers from the Winter 2019 season. It’s been a blast, honestly. But now to move on to warmer times. We’ve already announced our lineup for the Spring season. So check that out, when you can! And expect to see some new additions around here, come the next installment. Including the latest of the “older” reviews, Kotoura-san! In the meantime, though, thanks for reading, as always! Keep up the Awesome!