Ry: Time to what? Time to watch you cry from defeat once again? That’s always fun.

EvilBob: Hey, that was one time! And it was rigged anyway.

EvilBob: … Let’s get down to business. 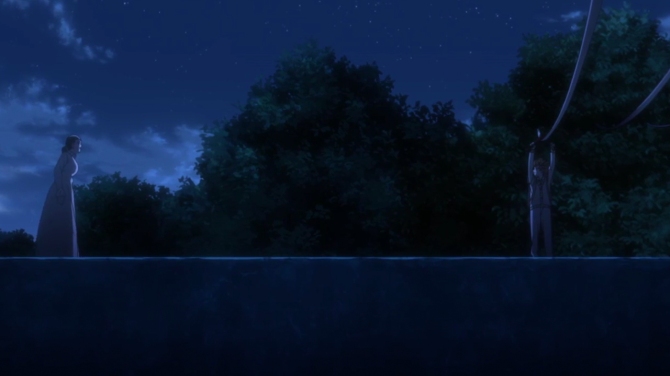 Ry: Ah all of the build-up hs paid off The Promised Neverland has delivered on a very satisfying ending for its first season.

EvilBob: Right? It was amazing all that build up was totally worth it. Norman’s finale strategy has been successfully used and most of the kids are safe now. I do think that betting on the younger kids being safe for a few years is a bit of a risky gamble but I think the escape would’ve failed if they brought them along.

Ry: The Little ones probably wouldn’t have been able to get up the wall and without them still there who would have held up Isabelle and delayed her enough for them to escape?

EvilBob: You have a good point. I mean she did end up getting on the wall before Emma jumped off so if they had more kids it might’ve been game over for the kids. Oh and before I forget. The moment Emma told mom goodbye might just be my favorite moment from the show.

Ry: Yeah, then there was the interesting little flashback that revealed Ray is Isabelle’s son. This means she was going to sacrifice her own son for her survival.

EvilBob: Isabelle even told him that much, talk about dark. I think I understand why he’s like he is. He knew about why he was born and he knew it was his mother’s job to ship him out as food for demons. And he still tried to save his friends from the same gruesome fate. Even when things kept falling apart in his face.

Ry: The ultimate payoff for the episode was when Isabelle finally admitted her defeat and let down her hair. Oddly enough she was smiling which makes me think somewhere deep inside she wanted this to happen.

Ry: You know what? I can’t even argue with that statement.

EvilBob: I can even buy his “it’s the duty of a lord speech.” Hey, Tahoumaru guess what? Your father made a deal with demons. Demons tend to go back on their word so Your brother might just be the best bet for your people in the long run.

Ry: Yeah, I don’t buy it at all with him being so against it then switching to his father’s side after one scolding, after knowing the truth, He did suffer for this with the loss of an eye but you can’t fix stupid.

EvilBob: And then there’s the father of the year. Who sat back as his sons tried to kill each other. 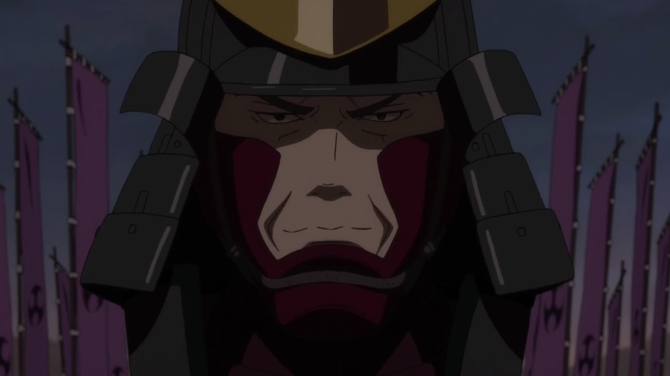 Ry: He even doesn’t flinch as one loses an eye, he did, however, react as his wife killed herself in front of everyone, and apparently broke some sort of protection.

EvilBob: Yeah, that was tragic. We should see what happened in the next episode. 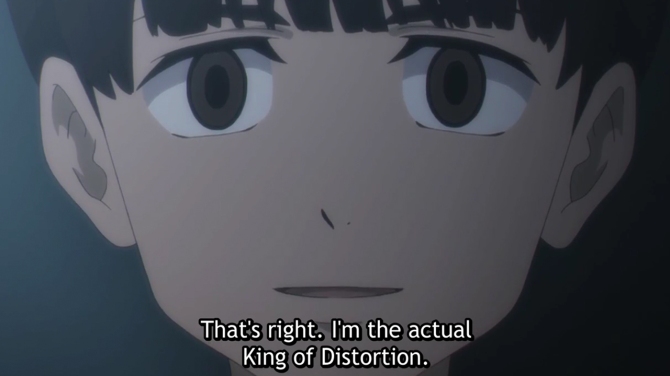 Ry: So will the true King of Distortions please stand up? Oh, there he is.

EvilBob: Yeah, this was a wild ride. So the guy who finished off the first real villain with an arrow is The King of Distortions. At least we know how he knew about Boogiepop.

Ry: Boogiepop finally meets the King of Distortions and they have an epic battle of city shattering proportions…

Ry: Yeah no combat this time.

EvilBob: Boogiepop just talked the guy out of fighting. I was waiting for some epic clash and we got this instead. And I’m okay with it. I mean it’s not like the guy was actually evil.

Ry: Boogiepop basically even ask him if what makes him think they had to be enemies, and for once in the show lets someone who was the antagonist of an arch live. 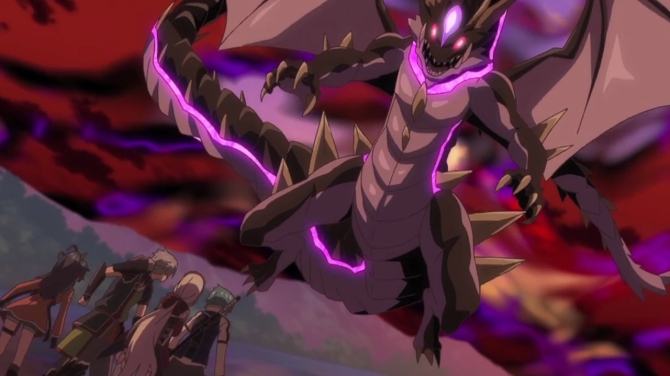 EvilBob: This one goes in the may come back for another season category. The didn’t really wrap up anything in this final episode and I have more questions than I’d like to have.

Ry: They did at least get rid of the main antagonist of this season, so that was good.

EvilBob: Did they though? Curly was his boss and she is still out there with the cult she runs. Over half, this episode was a fight scene too. That part I liked, we didn’t get just one boss this time we got two and the heroes lost the first round.

EvilBob: Enter Ludwig Grimm he’s a storyteller. Yes, one of the God-like beings that created this world. He takes over for Ex at one point and basically clowns the bosses that gave them trouble like it’s nothing.

Ry: It wasn’t even funny how fast it ended once he appeared. They finally beat Loki but who knows what new foe waits around the corner.

EvilBob: If this ever gets another season I’m sure we’ll find out. 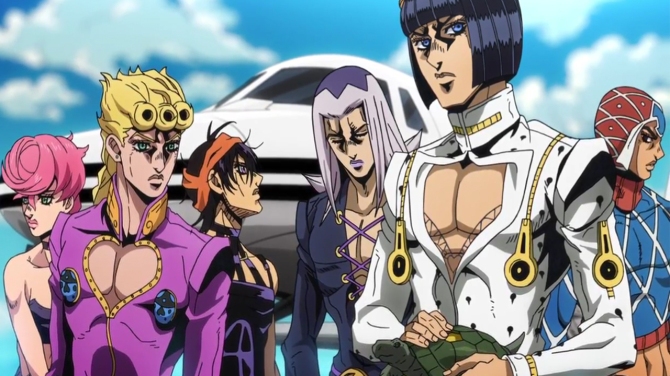 Ry: It’s a peaceful day at the airport with checking for foes and shooting a running man. Followed by a peaceful flight.

EvilBob: That’s what it would look like if this wasn’t JoJo’s. Veterans of this series know when they get in a large vehicle things are about to get messy and this episode is no exception.

Ry: Yeah crap hits the fan real quick as a Stand is soon found inside of Giorno’s arm and begins to terrorize him and the rest of the group.

EvilBob: The thing takes out Mista and Narancia before Giorno sacrifices his remaining arm to kick it out of the plane. Of course, this means that he can no longer fight. 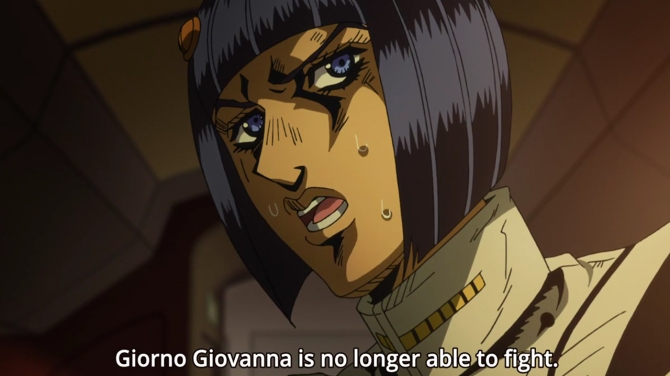 Ry: Keep in mind one Stand has effectively taken out the entire team The two dps units and the healer sounds like an Overwatch match. Also kicking it off the plane still didn’t really work. The thing flew back on.

EvilBob: Yeah, you know Giorno seems to have the bad habit of losing body parts making him useless until just the right moment. Although It’s looking like Trish will be fighting in the next episode so this should be interesting.

Ry: I believe her Stand will be as op as her dad’s and she will basically one shot this thing next time, that’s just what it seems to be building too. 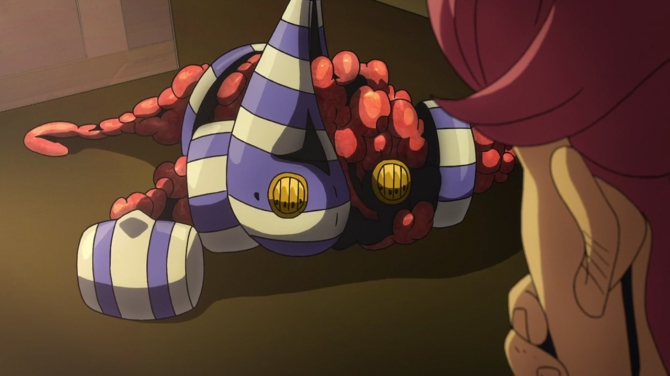 Is It Evil Ratings

EvilBob: Mom is doomed and the children have won this battle. But what will the war even look like?
Ry: I have one thing to say to you. Read The Manga.

EvilBob: Never! Like I have time to read the manga for any of these shows. Anyway, This episode was about as Evil as a Super Villian! (10).

Ry: Family Reunion goes badly and someone loses
an eye.

EvilBob: You know I don’t think anyone read the memo about the possibility of losing an eye when handling sharp objects violently. But seriously Tahoumaru is an idiot. I don’t care what duty you think you have to that moron of a father you have you know what your doing is wrong.

Ry: Maybe his mother’s death will change his mind? Still, this episode was about as Evil as a Super Villain! (10).

EvilBob: It’s over and nobody died.Ry: Everyone just woke up after a refreshing nap and weird dreams.

EvilBob: I’m not going to pretend I know exactly what just happened but it was a fun watch for the most part. In fact, I’d say this episode is about as Evil as a Killer Robot Army! (8). 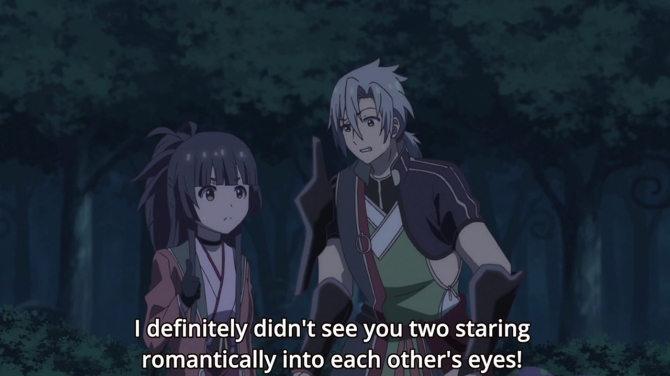 EvilBob: Yeah, that’s exactly what happened. I just wish we got more on Ludwig. I know he’s a storyteller based on his ranking in the game but in the show they made it seem like there’s only one of those. I wonder if they are just so legendary that the inhabitants of the world only thing that there is one of them.

EvilBob: Three men down and Trish is up to bat.

Ry: Let’s hope she hits a home run and finally shatters the damsel in distress vibe she’s had since she showed up.

EvilBob: Yeah, If the OP is right she will be fighting with her Stand. I think the next episode is gonna be fun. This episode was about as Evil as a Super Villian! (10). 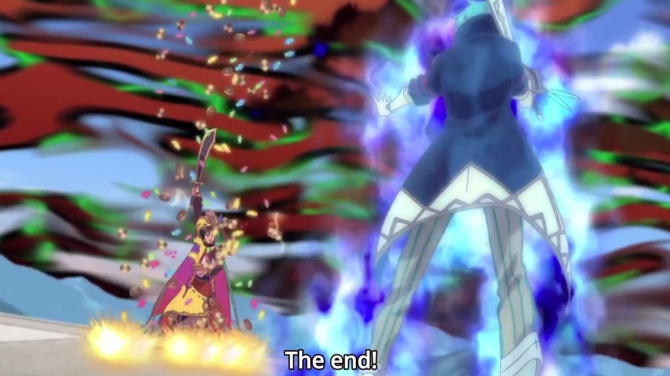 Ry: Well, this has been an awesome season.

EvilBob: Indeed I guess it’s about time to close this final Weekly Evil out then.

EvilBob: For Mob yes. All the ones we’ve been covering end here except for JoJo’s and Dororo. I can cover those alone they come out on way different schedules from one another.

Ry: Well then I can tell when I’m not wanted.

EvilBob: Don’t be like that. Anyway, Well, that’s all we have for you today. Thanks for letting us waste your time people. Keep an eye out for the TKO Finale and Keep It Classy.