Well, this sure was an interesting week. The Promised Neverland hit me like a ton of bricks and JoJo’s Bizzare Adventure: Golden Wind is still pulling no punches with it’s brutal and stylistic action. In just two weeks, a lot of the shows will be ending. Let’s just wait and see which ones end the best.

EvilBob: I may actually have a chance to win this thing.

EvilBob: You’re never gonna give me anything are you?

Ry: So, the kids are on the far end of a hexagonal property with a bunch of other farms in the surrounding area.

EvilBob: But no worries. There’s a way out. It’s a single bridge on the opposite side of the complex and it leads straight to headquarters. Isn’t that just perfect?

Ry: With the plan in shambles due to the discovery of the chasm separating the wall from the outside, things are not looking good, even before Normal gets shipped out.

EvilBob: Norman leaving was a pretty heavy blow to the feels. Poor Emma. She was devastated and it didn’t help when mom interrupted their touching goodbye.

Ry: She even continued telling Emma to give up. Even sometime after Norman was gone. It seemed both Emma and Ray had given up all hope.

EvilBob: Until Ray asked Emma if she’d really given up then we got this look from her.

Ry: That doesn’t look like the face of someone who’s given up. The next episode should be something special.

EvilBob: You know, for some reason, I got hungry while watching this episode. Anyway, Hyakkimaru’s father is now actively trying to find him. And his younger brother, Tahoumaru, has caught on to some of what’s going on and is conducting his own search.  All while demons attack people in the family’s territory.

Ry: Tahoumaru, actually goes out of his way to help the people when he hears about a giant crab monster attacking a nearby village.

EvilBob: The dude even got some of the soldiers involved in trapping the beast and he kept trying to kill it after failing the first time. Got to hand it to him, Tahoumaru’s a pretty ballsy guy. 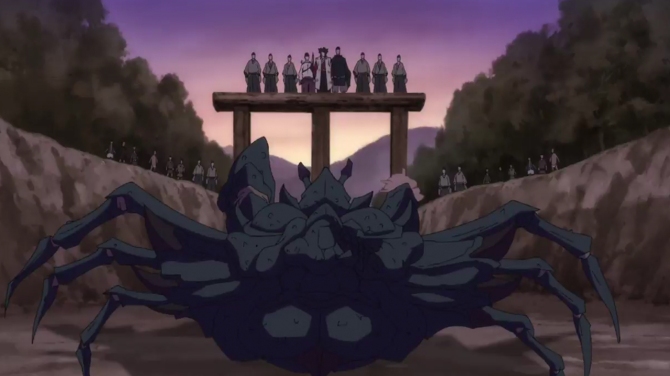 Ry: The trap doesn’t go as well as he hopes and they pretty much have their butts handed to them.

EvilBob: But Tahoumaru and his group don’t give up. They simply keep fighting until they gain the upper hand and then the kill gets stolen by Hyakkimaru, who arrives on the scene in the nick of time.

Ry: I do wonder where this is going with the brothers. Are they gonna team up or try and kill each other in the future?

EvilBob: We’ll have to wait for the next episode to find out. 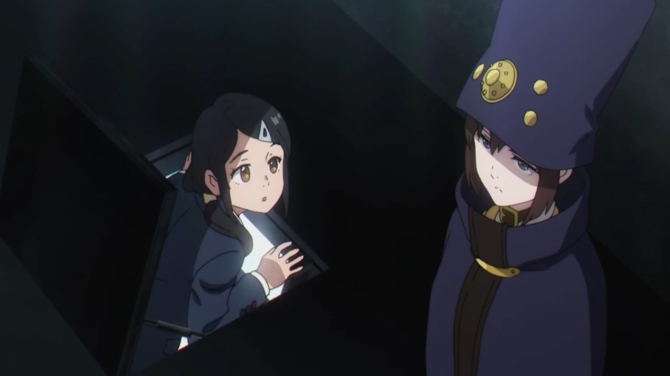 Ry: So, the tower was meant to get a reaction out of people and it’s somehow awakening superpowers in the process. That’s kinda weird.

EvilBob: Yeah, I don’t really get it either. It’s got something to do with split personalities and to be honest It’s still doesn’t make a whole lot of sense to me yet. Let’s just go with the tower awakening latent abilities. It’s the easiest explanation we’ve got so far.

Ry: So that random Kaiju from the last episode is someone’s ability?

EvilBob: In a way, I suppose. I’m not an expert but it did seem to be directly linked to the kid it kept chasing.

Ry: That thing was weird. It could stretch one of its necks to incredible lengths and it was like rubber or something.

EvilBob: And apparently, it wasn’t entirely real. Boogiepop said something about some of its energy leaking through, causing damage to the building.

Ry: And now the building is coming down around them. It’ll be fun to see how they get out of this one. 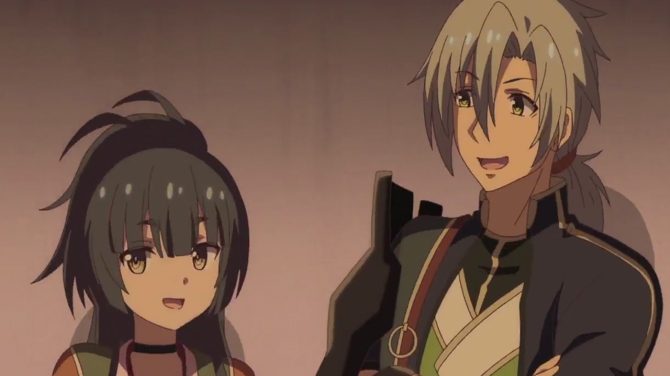 EvilBob: You know, it’s nice Reina wasn’t the reason they got involved this time. That joke was getting really old.

Ry: Yeah, the “food made me do it thing” wore out its welcome, but hey, they picked an interesting story zone this time.

EvilBob: This time it was the story of  Joan of Arc and it started right in the middle of a battle against a horde of villains.

Ry: They did, of course, win. Then Reina shows a few hints of jealousy towards Joan.

EvilBob: Which felt a little misplaced given that she hadn’t shown she that has feelings for Ex, so far. I’m not complaining, it just seemed to come out of nowhere. And the fact that she felt it towards Joan seems a little petty seeing how they aren’t likely to see her again.

Ry: So the Chaos Teller, apparently born of the rage and hatred from the people of England, kidnaps Joan and is going to make her meet her fiery fate before her time.

EvilBob: Now, I have a few questions.

EvilBob: If Joan was gonna die anyway, why would it happening earlier affect the story? I mean she’s still gonna die for the same reason right? So why does it make a difference when?

Ry: Well, maybe she would inspire people with her death only in a certain location at a certain time?

EvilBob: Still, doesn’t make much sense. Anyway, The tea arrives in time to save her from the Choas Teller so everything worked out in the end. Joan still gets to die a horrible death and her feelings will pass on to future generations and all that noise. 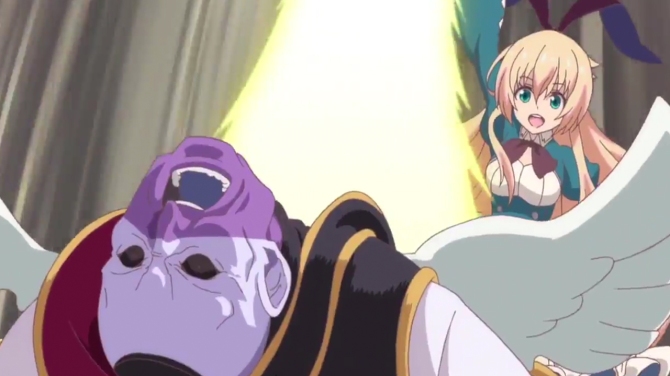 Ry: I’m so glad this isn’t another recap. I really missed this dumb show. And It looks like it came back with a vengeance too. Right into another fight with a civilian.

EvilBob: To be fair, the guy did get into Narancia’s personal space and threaten him. Ya don’t do that if you want to live. That being said, I don’t think a wine stain is really on his mind anymore.

Ry: I think all he can think about right now is the pain. 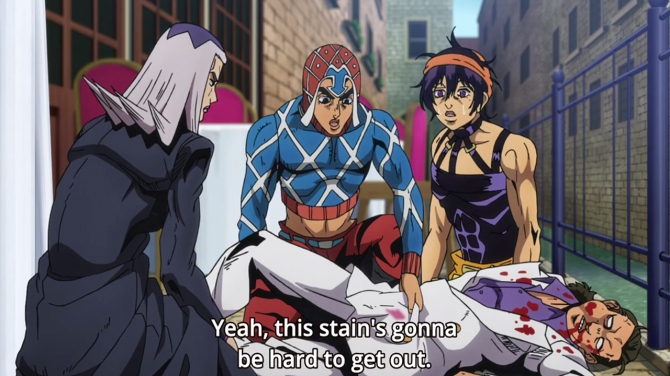 EvilBob: And this was before things started to get weird. After the civilian has been dealt with, Narancia notices something strange in his soup.

Ry: Was it a mushroom, a carrot, or was it something like a tomato?

EvilBob: It was brown in color so I don’t know what it was made of. But no he found something far worse. He found a shark swimming in it.

Ry: This little Stand takes out Narancia’s tongue and then vanishes, giving Giorno time to make him a new one.

EvilBob: Of course there was another enemy Stand hiding on Narancia’s tongue, which made him say the opposite of what he wanted to. This led Giorno to discover what was happening.

Ry: Unfortunately, once Giorno figured it out he was attacked and the shark bit deep into his neck, I don’t know how he’ll get out of this one. 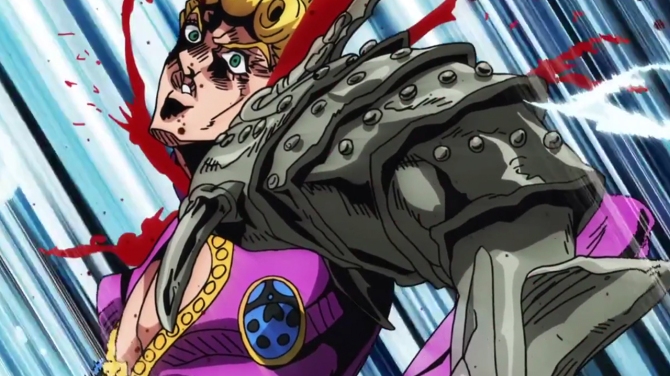 Is It Evil Ratings 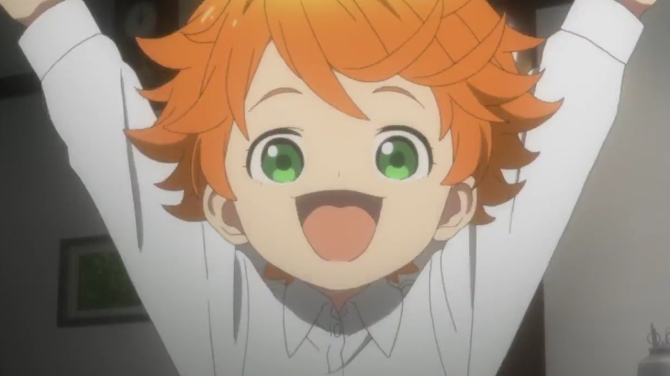 EvilBob: The kids had all hope taken from them, but surprise. That was a trick.

Ry: Yeah, this show is ramping to what should be an amazing end.

EvilBob: This will most likely be getting a second season. I doubt it’s gonna really end anytime soon.

Ry: Well, the manga has a lot more to work with, so yeah, it’s most likely getting second if not a third and so-on.

EvilBob: Let’s just hope it keeps being this good. So far this series has been great and this episode is about as Evil as a Super Villian! (10). 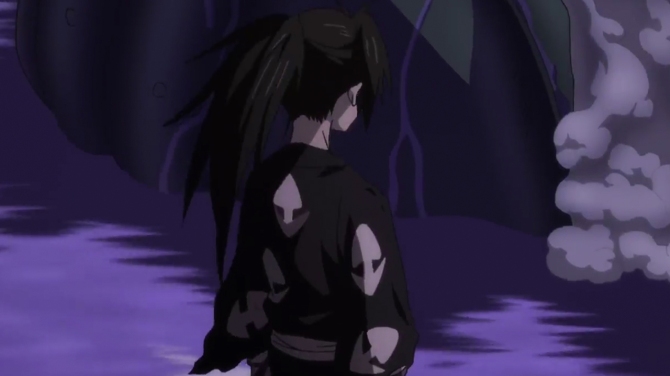 Ry: So the brothers finally met, and they slew a monster together. Ah, family bonding and a seafood dinner that has to be the start of a wonderful friendship.

EvilBob: That’s not what happened at all. Although I am curious if the big crab is edible. It would be terrible if they let that go to waste.

Ry: I get the crab legs. Anyway, this episode is about as Evil as a Super Villain! (10). 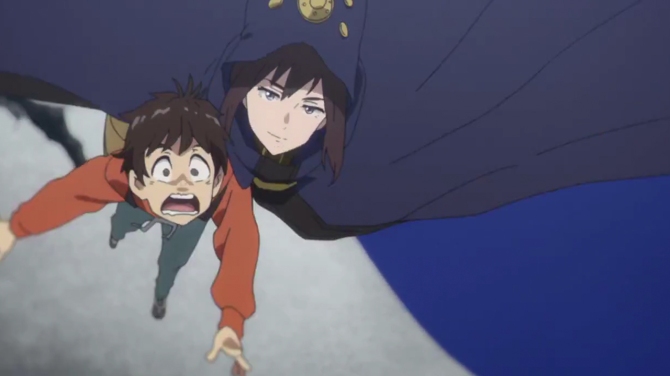 EvilBob: Things stayed weird and Boogiepop fought a Kaiju… That part was awesome.

Ry: And very strange but it’s Boogiepop, it was very interesting to see Boogiepop fight that thing.

EvilBob: Yes, I said that. This episode is about as Evil as a Killer Robot Army! (8).

Ry: Ex and company save Joan from a fiery death just so she could die the same death, later on. But it’s okay. Her feelings will carry on.

EvilBob: Screw feelings. She’s dead. Period. At this point, I’m agreeing more with the guys creating the Chaos Tellers than I am with these heroes. And I would be mad if that wasn’t the point of episodes like this. The heroes always have tough choices to make. In this case they couldn’t really win because if they saved Joan, the story zone would perish.

Ry: That kind of choice really sucks, but this episode is about as Evil as a Villian! (9).

EvilBob: This series once again that its characters have serious problems and Giorno is in danger… again.

Ry: Yeah, like their favorite sport – beat the civilian.

EvilBob: It’s disturbing how funny that actually was. This episode was about as Evil as a Super Villian! (10).

Ry: So that’s it for this week, I guess?

EvilBob: Yeah. Unless Boogiepop did that thing again… Let me check.

Ry: How long is this gonna-

EvilBob: Well, looks like we’re in the clear for now, anyway.

Ry: Well, that’s good. Are you gonna close us out now or what?

EvilBob: Well, that’s all we have for you today. Thanks for letting us waste your time people. Make sure to check out Voyager’s side of things if you have the time. Keep It Classy.