What can I say? I just can’t stay away from this series. How Evil are episodes 9, 10, and 11 of JoJo’s Bizarre Adventure: Golden Wind?

First, Bucciarati’s group warded off a duo, set on stealing the money that Bucciarati inherited from his dead boss. And now they’re fighting a group of hitmen who want to get back at the boss by using his daughter against him. Ah, how I’ve missed this show. If the bad guys aren’t hurting animals they’re being a major pain to the main characters. Anyway, after literally everyone else getting a chance in the spotlight, it’s Narancia’s time to shine.

After a brief meeting with another Capo, Bucciarati gets promoted to replace Polpo, just as he’d originally planned before they got attacked on the boat. Right after Bucciarati’s promotion, he and his team are given their biggest mission yet – protect the boss’s daughter from a team of thugs that’s out to get her. Bucciarati gets his team to find and lock down a nice secure area that they can protect Trish in. This is where Narancia come in. He’s sent on a supply run but gets spotted by Formaggio – just one of the many guys after Trish. Narancia does get to use his little plane Stand to shoot the guy up, so it’s good. But, of course, the guy vanishes on him. 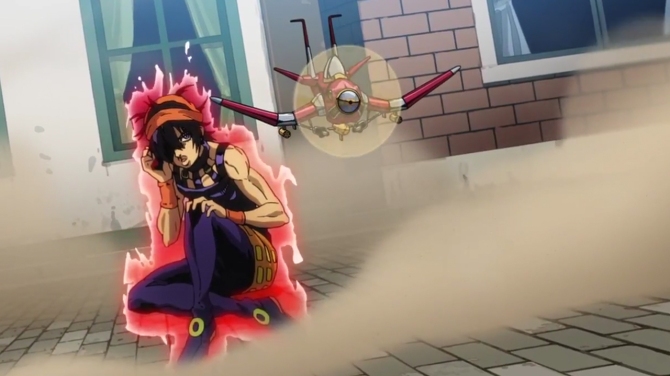 This time we start with Narancia still looking for the guy that attacked him. It turns out that Formaggio’s Stand allows him to shrink people and things – something that Narancia finds out a bit too late. The first face-scrape that Narancia received just happens to be all it takes to shrink someone down to the size of an insect. It does have the drawback of happening slowly though.

For a good portion of the battle, Narancia appears to be winning. He may be shrinking but Formaggio is already fully shrunk. This gives Narancia an advantage with his Stand. Until Formaggio figures out the plane is tracking him with breath. Every time he exhales, the thing is after him. This prompts Formaggio to hide in the storm drain which gives him the upper hand, if only for a bit. Narancia adapts to the clever rouse and shoots Formaggio anyway. But his time has already run out. Narancia is now too small for his Stand to kill Formaggio. 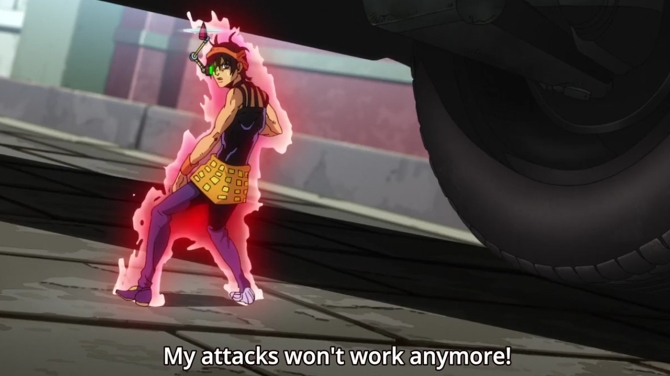 With Formaggio now in control, the fight has diminished into a torture session. Formaggio is a terrible person. He resorts to stepping on Narancia as well as feeding him to a spider. It was kind of hard to watch, to be honest. I can only imagine how Voyager’s gonna feel about that last bit. But this is JoJo’s. There’s no way a good guy is getting offed… this soon.

Narancia managed to hit a car’s gas tank just enough to catch it on fire and blow up in Formaggio in the face. This forced the Stand’s ability to disappear, saving Narancia in the nick of time. Formaggio tried to hide, of course, but Narancia sets the whole street on fire to force him out. This leads to one final confrontation, with Narancia coming out on top.

There was a lot of flashback stuff I didn’t go into but I’d say these episodes are about as Evil as a Super Villian! (10). If you still haven’t seen the latest results for the tournament make sure to check it out. Well, that’s all I have for you today. Thanks for letting me waste your time, people.

One thought on “JoJo’s Bizarre Adventure: Golden Wind Episodes 9 – 11 Catch Up Recap | Is It Evil?”