The first kaiju returns with some improvements. I guess Akane is running out of ideas. How Evil is SSSS.Gridman’s 8th episode?

I was worried that Trigger would mess up during this episode and make me regret haven picked up this series. So glad they haven’t done that to me… yet (Voyager: Yeah… it is Trigger, after all). So far it’s been what I was hoping for – a Tokusatsu homage that draws on some of the live-action shows from the past. The fanboy in me is practically leaping for joy during the fights.

That being said, I still have lots of questions about the actual motives behind Alexis’s actions. Why in the world is he helping Akane? We saw last time she isn’t the only one that can make Kaiju. I would think having more than one person making Kaiju would make things easier (Voyager: Make… what easier? We still have no idea what his goal even is). Also, Akane seems to be pushing her bad deeds on everyone else. She’s threatening to attack a school festival because she hates it and knows the main cast don’t want to participate. And then there’s the whole “Akane is a god” thing. Now she’s claiming her kaiju made Rikka to be her friend.

I mean, even if they did, does it really matter? People tend to rebel against gods, so have fun with that. Oh, and Anti made an appearance and his eye did get taken out. I don’t think he’s on Akane’s side anymore. He walked right into the shop while The Neon Genesis Junior High Students were there and asked to see Rikka. And then Calibur got his phone number. He didn’t even try to kill Gridman this time or anything, either.

Anyway, The Gridman Alliance comes up with the perfect strategy to protect the townspeople from the new old Kaiju. Gridman arrives at the school first to prompt an evacuation. This move surprises Akane but she sends in the Kaiju to attack anyway. It doesn’t take long before Akane realizes there’s something different about Gridman – his size has been reduced by half, which gives her some false hope that she can win this time. Unfortunately for her, the reason for Gridman’s scaled downsize is to lessen the strain on junk and allow him to merge with all of  The Neon Genesis Junior High Students at once, forming the Megazo- I mean Voltr- I mean… this awesome thing! 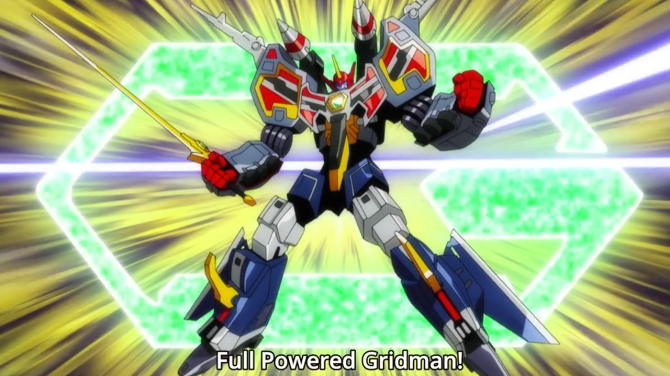 With his full powered form, Gridman makes killing Kaiju look extremely easy.  In fact, as soon as he transforms, the Kaiju is unable to damage him at all. He even tanks a giant beam attack and pulls off the things head… again. Look, I’m not going to spoil the entire fight. Just go watch the episode.

After the battle, Akane skipped the festival. She told someone she wasn’t feeling well or something like that.  We do get to see what she’s doing. She’s just sulking about her loss and Alexis is trying to comfort her.

Overall, I’d say this episode is about as Evil as Villian (9). If you haven’t already, check out Voyager’s recent editorial it’s a good read. Well, that’s all I have for you today. Thanks for letting me waste your time, people.

SSSS.Gridman is on Crunchyroll.

One thought on “SSSS.Gridman Episode 8 Recap | Is It Evil?”