Okay, class what did we learn today? Addiction makes people into zombies and AI is the root of all evil. Speaking of which, How Evil is Akanesasu Shoujo’s 7th episode?

As the others give into their addictions, it’s up to both Asukas to get the job done. Asuka and Chloe haven’t been able to communicate for a while, leaving both girls a little cautious about what might be going down. Chloe’s sent multiple letters and received no reply, at all. Asuka’s still waiting for a reply as well, but she’s also witnessed the power the AI has over her friends, who are now addicted to their mobile devices.

Asuka devises a pretty good plan to get them back to normal too. She makes them all dinner. Now, granted, that doesn’t sound like much of a plan in the grand scheme of things, but it did two awesome things. All the girls sat down in one spot with food right in front of them. And then they put down their devices with Asuka standing over them. Yes, Asuka used food to distract them.

And then she promptly took the phone-like devices and chucked them into the ocean. Of course, she was nearly trampled by the others as they chased her to get them back but most of them lost the will to do that once they were gone. There was a bit of weirdness with Mia but Yu-chan one-upped her on that. No, I will not spoil that part for you. After a few minutes, all the girls seemed to go back to normal so I guess going cold turkey helped.

That’s when things shifted back to Chloe. She has been trying to destroy the AI with a virus and can’t seem to get close to the island it’s on. It turns out that she’s been trapped in VR for who knows how long. Maybe a drone put it on her head after she found the virus? Anyway, that’s the least of their problems. As it turns out, Twilit Asuka’s Astral Module can now pick up a Clutter in the direction of the AI’s server. 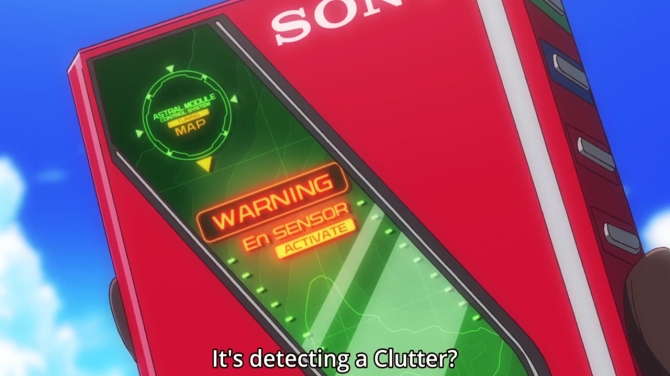 With a Clutter nearby, the girls set off to defeat it. If you thought the fights have been awesome so far, this one will be your new favorite. Every single girl that could transform so far did in this one episode. And they were fighting super clones of some of the people they already beat. And when I say super, I mean the girls were getting kicked out of their transformation rather quickly.

That awesome battle was happening while Chloe transformed and dove into the underwater server room to implant the virus. And that was another battle altogether. The entire server room was the Clutter’s body, so Chloe had to fight off a creature the size of a room. It seems like each new clutter is stronger than the last, which is a great way to mix it up. Chloe did manage to insert the virus, which freed all the people the AI trapped. So we have our happy ending for this world.

Overall, I’d say this episode is about as Evil as a Villian (9). When you get the time check out what Voyager’s watching. Well, that’s all I have for you today. Thanks for letting me waste your time, people.

Akanesasu Shoujo is on HiDIVE.