I think I need to go to the dentist now. Pretty sure I have cavities. How Evil is the fourth episode of Beelzebub-jou no Okinimesu mama.?

I don’t think this show knows how not to be cute. Well, at least when Beelzebub is around. She’s just adorable. I think that’s one of the things this show’s good at. It may not be as fast-paced as some of the other shows on my list, but that’s not a bad thing. Still, relying on the cuteness factor alone can only really get it so far. I could talk about how cute it was forever, but I should probably try and talk about what else happened too.

This time around, it seems Mullin may finally be getting the hang of his job. He’s able to get Beelzebub back on track when she goes off on one of her fluffy rants now. He even gets dragged along to some kind of big meeting with the higher-ups. And that’s where he met the demon of the week, Eurynome. She may or may not have a thing for young boys. It’s hard to tell. She has such a good poker face. 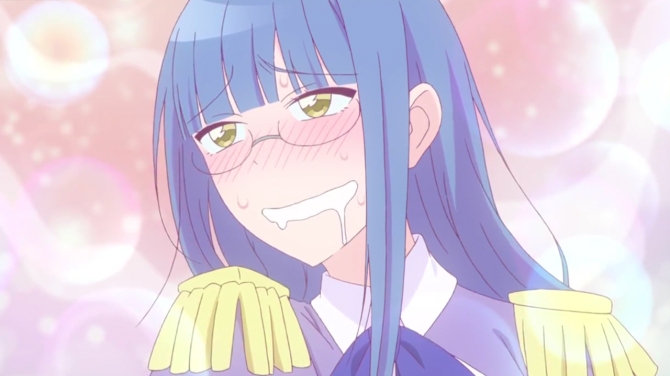 We also get to see her interact with Astaroth and Sargatanas, from last time as well. She absolutely hates Astaroth and his advances until Mullin gets her to look at him through her imagination, seeing him as a young, innocent boy instead of the man he is. She even seems to get turned on when Sargatanas starts to thrash him. Oookay then… moving on.

In the second half, we catch Mullin asking Beelzebub to go to a movie with him. And then he contemplates rather that would be considered a date or not. My dude, you already had a date with her. She even brings up that she thought that one was fun. Anyway, on the day of the movie, Mullin is strangely absent from his workplace. It turns out he got sick and had to stay home. So Beelzebub decides to pay him a visit and eat the peaches they bring him. Don’t get it wrong, though. Mullin offered to share them with her. He isn’t heartless.

Beelzebub is so worried about him that she tries to do things without actually knowing how, like cooking some porridge for him. At one point she even tries to wipe the sweat from his body and ends up falling on him, leading to Azazel getting the wrong idea about the whole situation. Eventually, Mullin hands over the tickets so that they can go to the movie without him.

Unfortunately, he didn’t realize that the only reason Beelzebub agreed to go to the movie was to spend time with him. She even came back to stay with him after leaving to go to the movie. She stays so long, in fact, that she falls asleep right next to him. When she woke up, she checked his temperature – the adorable, speudo-romantic way – and then went home.  She also didn’t seem to understand entirely why she stayed so long. Oh. And she got sick after that. Go figure.

Overall, I’d say this episode is about as Evil as a Politician (7). If you’re up to seeing what else I’m covering check out my recaps for Conception. Well, that’s all I have for you today. Thanks for letting me waste your time, people.

2 thoughts on “Beelzebub-jou no Okinimesu mama. Episode 4 Recap | Is It Evil?”