Finally, the weird faces have returned in force. How Evil is Golden Kamuy’s 15th episode?

The alliance has been formed, but how long it will last is anyone’s guess. Especially when Lieutenant Tsurumi has come to say hello, first thing. And that’s nowhere near the best part. With the combined effort of the newly formed alliance Lieutenant Tsurumi‘s troops are held off long enough to allow escape. The Alliance splits itself into two groups with Sugimoto, Asirpa, the Sensei, and Ogata in a group together. Shiraishi gets stuck with the other guys for the remainder of the episode.

With the group split up, we got some more of those interesting character-bonding moments that we saw in the first season. The first of those funny little events was a hunting session. Asirpa set a bunch of traps to get some birds and only got two while Ogata got three using his gun. She didn’t like that, but they used the birds to make chitatap. Also, it was confirmed that Sugimoto’s mental age is five. 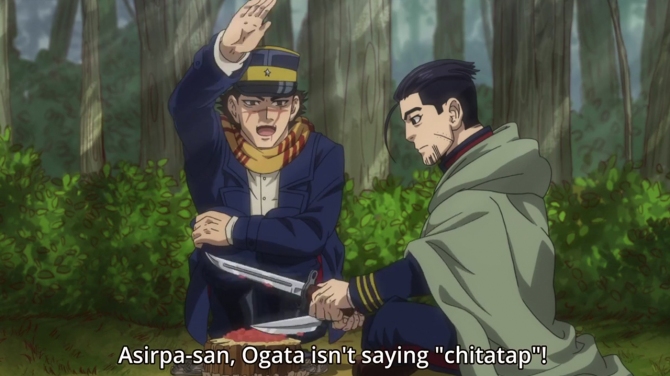 On the other side of things, I think Hijikata is planning on betraying Sugimoto and his group before all of this is over. I’m pretty sure that the team-up will only last until he deems it no longer beneficial and then there’ll be a showdown that may or may not result in death. After all, this is a treasure hunt. That kind of thing always happens. Though I think that will be towards the end of the series. It sounds more like final boss stuff than season two stuff. Hijikata wasn’t the only one up to something, though.

Lieutenant Tsurumi has put his plan into action. I’m not sure what exactly is gonna happen with all the chaos he has planned, but it’s sure to make things interesting.  It seems he’s planning on using the chaos to makes collecting the real skins easier but I have a few questions about how that will actually work. I’ll keep them to myself unless they don’t get answered. Lieutenant Tsurumi does seem pretty confident. 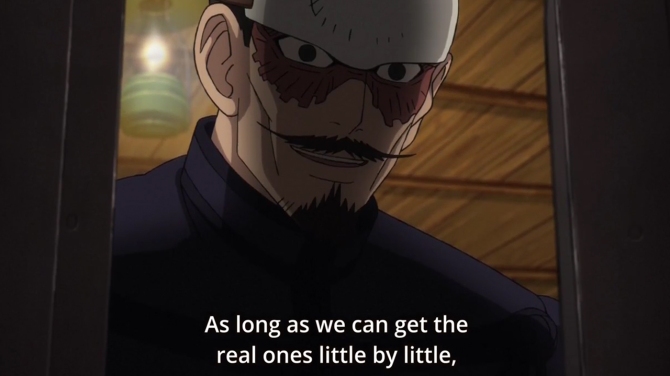 Now let’s talk about Shiraishi’s condition. That guy knows that his current position in all of this is unstable. He even had a dream about Sugimoto finding out and killing him. I think he needs to just come out and tell Sugimoto what’s going on so they can figure out a way to betray Hijikata before he does it to them. I know we got some backstory showing us why he was imprisoned, but there’s just too much we don’t know about the guy still.

Regardless, Shiraishi needs to get out of the situation as quickly as he can. He’s gotta help Hijikata’s group visit Asirpa’s dad in prison so maybe he’ll make a move while he’s there. One thing’s for sure if he doesn’t make a move soon, that dream just might become his reality. I hope not though. He’s a fun character.

Overall I’d say this episode is about as Evil as a Villian (9). It’s just so over the top I love it. If you like series that take things to the extreme check out my recaps of JoJo’s Bizarre Adventure: Golden Wind. Well, that’s all I have for you today. Thanks for letting me waste your time, people.