Oh My God! Tsubame is an idiot. How Evil is Uchi no Maid ga Uzasugiru!’s third episode?

It seems that Tsubame may, in fact, be stupid. That or she’s so smart, she looks dumb to us mere mortals. It all started like any other day. Tsubame was on her way to work when she spotted some girls around Misha’s age. Tsubame, being Tsubame, is taking a moment to stare at them and drool. And then she realizes that all of them are heading to school.

When she confronts Misha with this new discovery. Misha informs Tsubame that she’s Rusian and doesn’t have to go to school and Tsubame seems to buy it. But when she goes out to check the mail, there’s a packet of school paper just waiting to get picked up. Upon reading the packet, Tsubame seemed to realize she’s been had. Luckily for her, Misha’s dad arrived just in time to be asked an important question.

With the cat out of the bag, Tsubame decides to talk Misha into going back to school. The talk doesn’t go the way she hoped it would, but we did learn some interesting facts that we didn’t need to know. Like how Misha is using more toilet paper than the average person in Japan. Seriously, why does anyone need to know that?

And that’s not the only thing she’s up to either. She had this grand scheme to marry Misha sometime in the future… At least that’s what it looks like. I can’t really tell if that’s what she actually wants as she was daydreaming for that part. She must’ve looked like a creep while doing it because Misha agreed to go to school just to stay away from her. 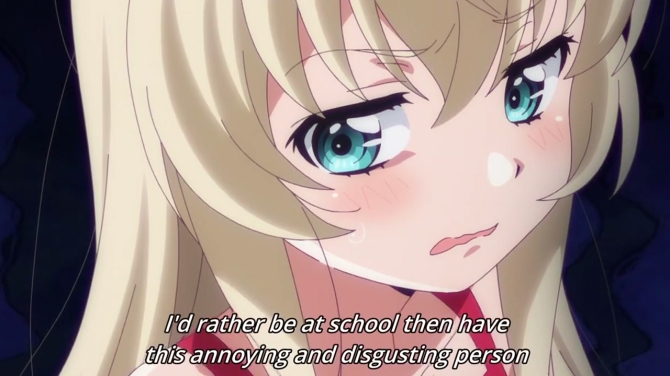 With Misha going to school, Tsubame gives up on all the weird stuff and they live happily ever after… Yeah, right. Tsubame paraglides onto the roof of one of the school buildings and infiltrates the school just to be with Misha. Tsubame does find her in class but gets distracted by the situation Misha’s class is in. It has to do with hamsters. Look, you just need to see that part. It’s cute and funny.

Oh, and Tsubame gets caught by the authorities while at the school. It’s kind of funny how they never said a word to her. They simply smile at her the whole time. It’s creepier still that Tsubame seems to be afraid of them. Also, I’m finding it hard to believe that she was just a pilot now that she showed off her infiltration skills. 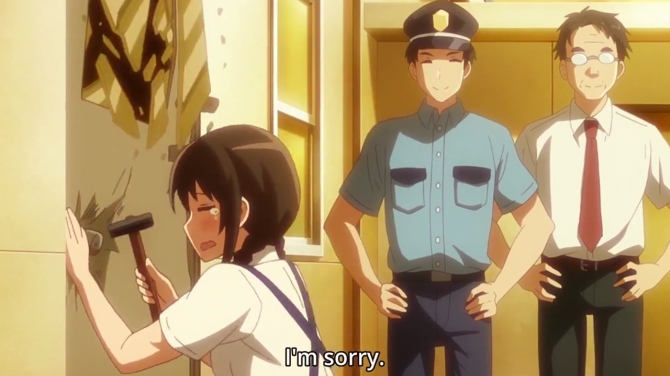 Overall I’d say this episode is about as Evil as a Villian (9). It’s funny and we had another moment that pulled at the heartstrings, unfortunately, it feels dampened by Tsubame antics. If you have time check out Bulletoon Weekly. Well, that’s all I have for you today. Thanks for letting me waste your time, people.

Uchi no Maid ga Uzasugiru! aka UzaMaid! is on Crunchyroll.