That was cute. How Evil is the third episode of Tonari no Kyuuketsuki-san?

I feel like I need to apologize for this one. I have no idea if I can talk about this episode at length. It’s not that nothing happened. It’s just that not enough has happened and that’s not even accurate. This show is cute and adorable but like Beelzebub-jou no Okinimesu mama. It’s harder to talk about a lot of the shows on my list. I can talk about a more action-based series all day long without this problem but when it comes to the cute stuff I’m at a loss for words. Voyager could probably do it, but… wait… did he-? Oh my god, he sabotaged my list… Well, anyway, let’s see if I can get this long enough to matter.

Last time we saw the hilarity that ensued with Sophie just leaving her house during the day.  While that was funny, it also set the stage for her to have even more daytime adventures and that happened this time. Both parts took Sophie out of her comfort zone. The first of those was at Hinata’s house. This is the first time Sophie had ever been to a friends house before so it was special. Until the demon dog tried to eat her. Oh, also Hinata keeps eating her brother’s snacks so he’s a little miffed.

Ouch. After that, it’s back to school for Akari but she forgot her lunch at home. Sophie just thinks she’ll buy lunch at school and goes straight to bed as usual. That is until she thinks about all the work that Akari put into making it. This causes Sophie to deliver the lunch in person. that’s probably not the best decision she’s ever made, but man was it brave.

Fighting with the sun itself, Sophie battles the daylight in order to help Akari. Seeing how they made sure we knew that she was afraid of sunlight last time, that is a big step for her. Upon arriving at the school, some of Akari’s classmates mistake Sophie for an assassin. They change their tune rather quickly when they realize she’s Akari’s friend. 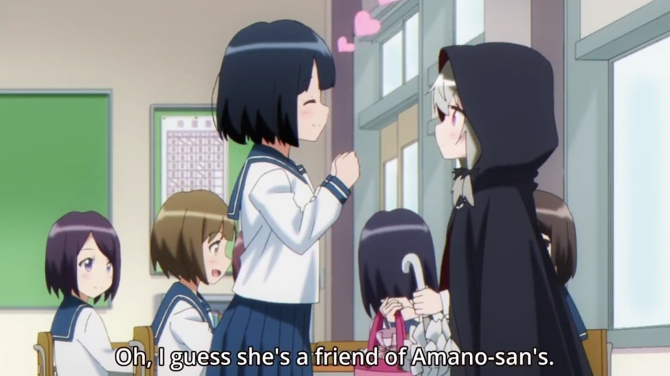 Sophie even stays for the rest of the school day, posing as another student. I still think that teacher knows she wasn’t a student though. There’s no way a teacher would be that dumb. Anyway, I’m wondering if Sophie will return to school in the future. It was pretty funny watching her adapt to modern school life.

I do have some concerns about it though. What did she eat? She never once drank any blood in this episode so how did she survive half a day of school? I guess she could’ve eaten before she went. Or just not eaten. Another thing. Do vampires get dehydrated? If they do, wouldn’t she have to carry blood on her, just in case? I guess it doesn’t really matter. None of that stuff really affects anything. My curiosity is just getting the better of me. At least Sophie was happy. That’s all that matters.

Overall I’d say this episode was about as Evil as a Killer Robot Army (8). If you have time, why don’t you check out the latest Bulletoon Weekly? Well, that’s all I have for you today. Thanks for letting me waste your time, people.

Tonari no Kyuuketsuki-san is on Crunchyroll.