Well, that was a lot to take in all at once. How Evil is the second episode of SSSS.Gridman?

After defeating a Kaiju, Rika, Yuta, and Shou arrived at a restored school, but it wasn’t as they had left if. Several of their classmates had died to the Kaiju and now no one remembers them even being in class. So is this gonna be like Power Rangers but with actual consequences then? I mean that’s cool and all, but I do wonder if the Kaiju are somehow warping reality when they kill people. The girls died in middle school according to their parents. Unless it’s just a mass memory wipe. But that doesn’t explain why the school was fine.

And then we have Akane. You called it, Voyager. She is indeed a villain.  I’m not sure if she’s the villain, but she’s the first one we’ve seen so far. I’m not entirely sure what her deal is just yet. I think they’re going for the “she’s just crazy” thing. Something tells me that isn’t the case, but this face though. I’m okay either way though as long as the show stays enjoyable to me. 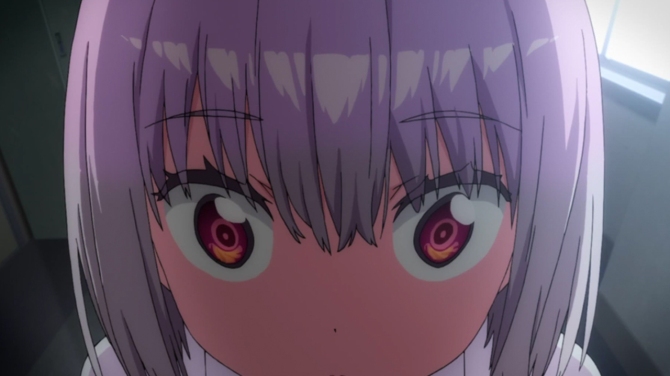 I do think she’s has a bad case of the kill-everybodys though. Also, I have a lot of questions I want answered. Akane makes those Kaiju out of clay or something shapeable, right? How in the world is a computerized head bringing them to life? Is it like Gridman and can manifest its powers as physical matter? Gridman is using a human to do it, but still. It seems like the same power. It did seem like Akane was controlling them by remote though. I have no idea how any of this works.

Anyway, Akane is a little nuts. She made a Kaiju just to kill her homeroom teacher. If that doesn’t spell overkill I don’t know what does. All he did was bump into her by accident. Sure it was a little jerky of him to not apologize. But that doesn’t really deserve this kind of response, does it?

But before we get to the epic boss fight lets cut back to Yuta and company. We finally got to meet the guy in black and his name is – get this – “Samurai Calibur.” And he’s just weird. To say he’s awkward is an understatement he can’t even use doors properly.

I also liked how Rika seemed to be trying to figure out how to process all this madness. Although I wish she had a bigger part to play. She seems like the more level-headed one of the group. She is the one that convinced Samurai Calibur to help Yuta by transforming into a giant honkin’ sword. That was weird and cool, all at the same time. 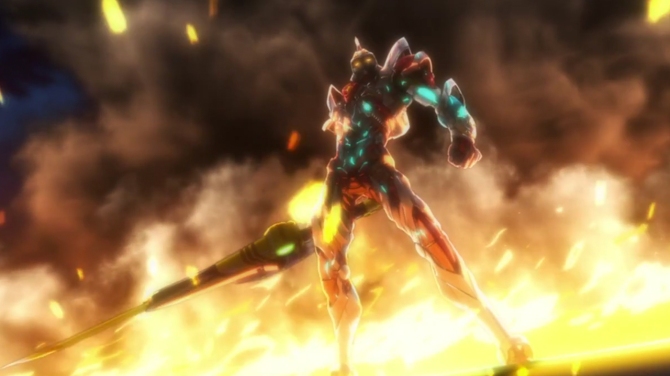 Overall, I’d say this episode is about as Evil as a Killer Robot Army! (8). This show has me hooked in a lot of ways right now. I’m enjoying it as an anime but I’m not enjoying this the same amount as I would something as cheesy as Power Rangers. Also, these first two episodes are a lot slower than I expected. If you want more action, check out my first recap for JoJo’s Bizarre Adventure: Golden Wind. Well, that’s all I have for you today. Thanks for letting me waste your time, people.

SSSS.Gridman is on Crunchyroll.

3 thoughts on “SSSS.Gridman Episode 2 Recap | Is It Evil?”