This is the most peaceful slice of life I’ve ever seen. How Evil are the first three episodes of Cells at Work?

This is a story about you. A tale about the inside of your body… According to a new study, the human body consists of approximately 37 trillion cells. These cells are hard at work every day within a world that is your body. From the oxygen-carrying Red Blood Cells to the bacteria-fighting White Blood Cells, Get to know the unsung heroes and the drama that unfolds inside of you! -Crunchyroll

That is a very accurate description and it gives nothing away about the show at all. This show has a lot of things happening at once, it mostly follows a red blood cell with her everyday job of delivering things around the human body. That would be boring if not for the threat of germ invasions, viral infections, abrasions and other threating events that occur in everyday life. Things get exaggerated really quick on this show too. A sneeze may be annoying to us but to the cells, in this show, it is an act of exile to invading gems through a rocket launch. 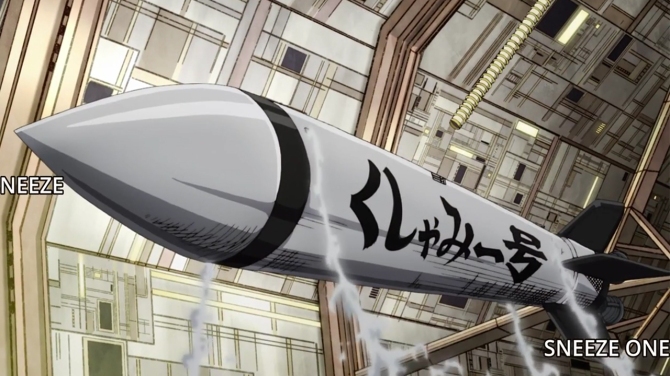 Okay,, enough with me talking about exaggerations lets get into the story so far. The first two episodes revolve around a red blood cell that I’ll just call Red, for now, to make things easier on me. Well anyway, Red is busy delivering oxygen and other things around the body there are two problems though. Red always seems to get lost and she apparently gems are attracted to her. Another main character is a white blood cell that keeps bumping into Red for one reason or another. I’ll just be referring to him as White from now on.

It’s through Red and White that we meet some of the other characters in these episodes including the main villain germs and the platelets. The platelets are the most unassuming and adorable characters in this show. We first see them trying to repair a road in the first episode but they take on a much bigger role in episode two when fixing an abrasion, but more importantly look at these little guys.

These little cells are responsible for rebuilding everything that gets damaged by gems of outside forces. Their abilities possibly make them the most powerful cells in the show. I’m not even joking in the first episode they were rebuilding a road and now they are sealing an abrasion which is basically a black hole. 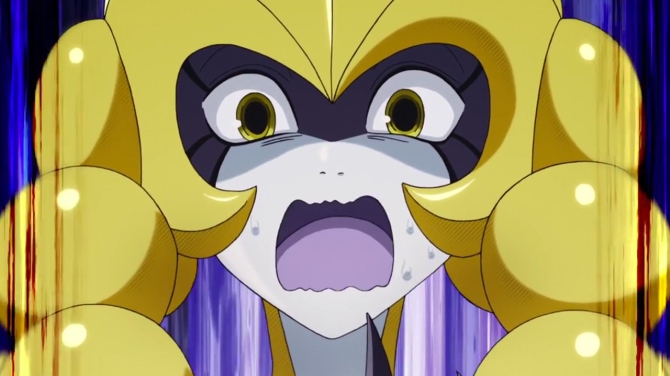 The third episode started with a zombie flue infection. Yes, it’s exactly how it sounds. We also get to meet Naive a young T cell noob in training. T cells are supposed to be murderous gem killing monsters that are called in as a last resort but Naive doesn’t fit the bill just yet. In fact, he has to be saved by White and another new character Macrophage. She looks like a made but kills things faster than any T cell we’ve seen. Her job is to call in the type of gem so that antibodies can be made but she can kill things too.

I do want to talk about the whole zombie flue virus thing. I think this entire set up was perfect the flue virus blends perfect with a zombie apocalypse and it was amusing to see this show take that route. Also, the horror approach for the episode’s intro was perfect having the zombies chase poor Naive was just an added bonus I was convinced he was a redshirt through most of the episode. 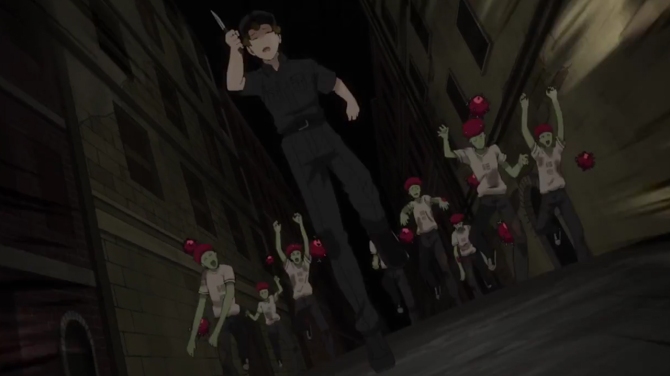 The zombie outbreak soon becomes an all-out war with the T cells and White Blood cells are contributing to the battle except for Naive. He is running scared and crying about how weak he is through most of the fight. Even Red wants to help but can’t really do anything against the outbreak.

With the cells on the brink of defeat Naive fins the strength within himself to awaken his true power. You not dealing with an ordinary Naive anymore, This is a super Naive yeah I think you get where I’m going with that. Point is he saves the day by becoming a super-powered cell of death and with his help, they are able to eradicate that strain of the flue from the body. Also Naive can clone himself.

Overall, I’d say these episodes are about as Evil as a Super Villian! (10). God, I love this show. Its educational and entertaining It’s impressive that it could even pull of a zombie theme and make it fresh and entertaining too. If you want comedy of a different sort, check out my recaps for Chio’s School Road. It’s funny for different reasons. Well, that’s all I have for you today. Thanks for letting me waste your time, people.