Well, looks like it might be one of those… How Evil are the first three episodes of Angels of Death?

Before anyone starts complaining that I don’t have a description from Crunchyroll this time I’ll just point out that they didn’t have one for this show. Which means it’s all me this time. From what I can tell so far this is almost like a Hunger Games scenario, The main character is trapped in a building and has to fight their way through an undetermined amount of floors or die in the process. Unlike the Hunger Games, each floor has a psychopathic master bent on killing any who intrude into their floor.

Now with that out of the way, I’ll begin the recap. As soon as the first episode starts we meet Rachel Gardner a 13-year old girl trapped on the bottom floor of the aforementioned hell hole. Upon finding an elevator an announcement is heard over the speakers stating that she has become a sacrifice. Upon entering the next floor Rachel has a run in with Zack a guy wrapped in bandages wielding a death scythe. Their first meeting goes great. They have a nice little talk and he tries to kill her. Luckily Rachel is a quick thinker and she manages to get away to the next floor where she meets up with her doctor from the first five minutes of the show. 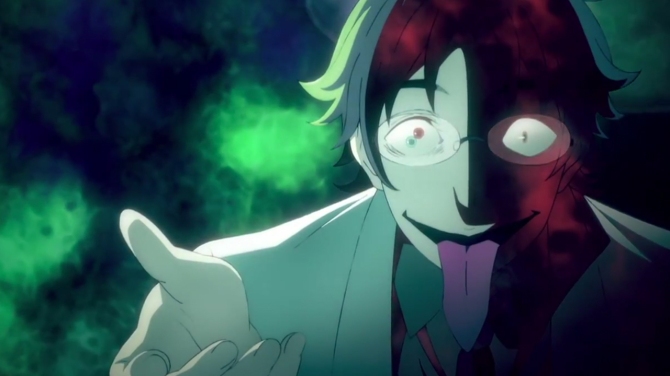 Dr. Daniel Dickens is a perfectly normal doctor who dreams of having perfect eyes. Okay, yeah he’s nuts too but he really only wants perfect eyes there’s just one problem with that. Rachel has those perfect eyes he wants, and he leads her into an operating room. He even gets her to wait in the operating room while he prepares. Of course, Rachel isn’t dumb and tries to get out but the door has been locked.

Rachel fights the creeps and tells him she just wants to be with her parents again. That’s when good ol Dr. Dan tells her that they are waiting for her in Hell. Now, this is something I’m not entirely sure about so bear with me. After hearing about her parents being dead Rachel seems to have a flashback that we don’t get to see. Whatever was in that flashback must’ve been horrible because from that point on Rachel wants to die. Of course, Dr. Dan before he can do it.  Zack rescues Rachel and would kill her but he can’t kill someone who’s already dead inside. After killing the good Dr. Zack is also branded a sacrifice for breaking the rules. With both of them slated for death, Zack decides to team up with Rachel in order to escape she agrees only if he’ll kill her when they get out.

While going up to the next floor we get a lot of information on Zack’s motivations he apparently came to this place with the promise that he could kill whoever he wanted. Rachel can’t seem to remember why she came here I’m not sure if that is because of drugs or some kind of trauma before coming here, either way, she will most likely remember before this ends.

The next floor is basically an indoor graveyard with tombstones for everyone that had ever been killed in the tower or at least this floor. There are even tombstones made for Zack and Rachel, now that’s ominous. Rachel follows a clue into a dark back room leaving Zack to entertain himself the only way he knows how. It’s best described as this “Those are some nice tombstones you have there, it would be a shame if something were to… Happen.”

When Rachel gets back she asks him why he killed the tombstones and his answer is that they pissed him off. Even with all of that destruction, they fail to find a way out but they decide to keep looking anyway. Oh, Rachel has been hearing laughing through most of this episode and the guy who made the tombstones is apparently leaving “love letters” for her to find.

In fact, the guy making the tombstones isn’t exactly happy with what Zack did to them. When Rachel and Zack split up again the maker decides to make his move by going after Zack first. We find out later that this was to make sure Rachel was far enough out of the way before his real plan came into play. Oh, this is the guy.

His name is Edward Mason and he wants to show his love for Rachel by killing her and laying to rest in a grave he made just for her. Strangely enough, Rachel doesn’t want that to happen. You would think someone who wants to die wouldn’t care who does it but she only wants Zack to do it. Or maybe she doesn’t really want to die after all?

Edward directly confronted Rachel and she chose to stay with Zack until she can help him escape and then she was even instrumental in killing Edward as she was able to distract him by laying in the grave he made for her and then blinded him with a flashlight before tackling him into the tombstone. When they got to the next elevator Zack gave Rachel the nickname of Ray. Well, that will make the next recap a lot easier.

Overall I’d say these episodes are about as Evil as a Politician (7). It’s not the worst thing I’ve ever seen but it isn’t the best either. As far as horror goes it is creepy I’ll give it that but I don’t know enough about the story to really rank it yet. At least it’s enjoyable if it remains this cryptic that might not stay that way. If this one doesn’t sound like it’s for you, check out the list of what we’re covering. Well, that’s all I have for you today. Thanks for letting me waste your time, people.

Angels of Death Simulcast on Fridays 9:00am EDT