Oh, so that’s the other guy who attempted suicide. How Evil are the fourth and fifth episodes of Nil Adirmari no Tembin?

Tsugumi has adjusted to her duties and now makes regular patrols by herself. This episode started with her returning to base and running into a new guy who wasn’t exactly happy to see a woman employed by the Bureau. It’s later explained that he’s a VIP and is a victim of the cursed tomes. He’s also a spoiled rich brat that I wish I could knock out. Seriously he’s extremely rude to everyone. He even gets nasty with Tsugumi when she tries to be nice to him.

The worst part is because he’s of the upper class, the bureau needs him on their next mission. They have to infiltrate a fancy dress ball. The problem with that is the guy seems to hate Tsugumi, at least at first. After he learns about Tsugumi’s brother and the two talk a bit, he agrees to escort her. Tsugumi goes undercover for the first time and discovers these guys while she’s at it. 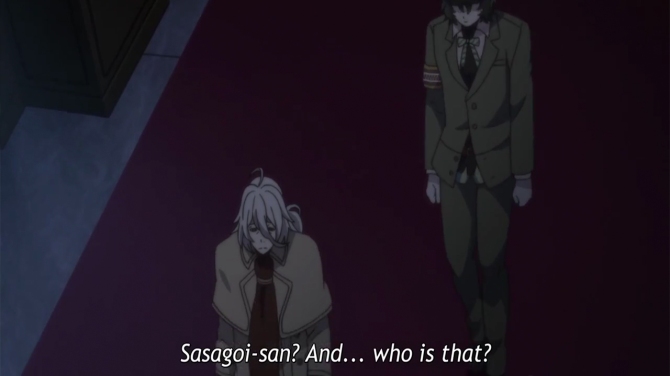 Nothing really big happens as a result, but it seems things are building up at least. The next episode spelled trouble for the resident author. Someone has been mimicking killings in his recent book so the police automatically think he’s behind it. To make matters worse, he’s been out of the base a lot lately.

And the bad news just keeps coming. Every one of the women killed interacted with him before they died. Don’t worry. It only gets darker from there. There are some very nasty rumors going around about how the author killed his former master out of jealousy. Don’t worry though I’m pretty sure that is mostly a rumor. More on that later. I just want to know why this evidence points to the author.

And while I’m on the subject of the author, how incompetent are the police in this universe?  The author slips out of their custody and arrives just in time to stop an insane chick who wants to die by his hands. This goes along with his book as well so it’s pretty obvious that this lady is the killer.

And then we find out the author has been keeping a cursed tome this entire time. They tried to fake us out earlier by making it look like he destroyed it, but it’s still around. I wonder if this caused that one chick to go on the killing spree, to begin with.

Overall these episodes are about as Evil as a Villain (9). Both episodes did a really good job keeping me entertained. I’m looking forward to seeing what they have planned. If you want something with a lot more action check out CVoyage’s reviews for My Hero Academia. It’s back and it’s as action-packed as ever. Well, that’s all I have for you today. Thanks for letting me waste your time, people.