So cyborgs are a thing in this show, now. How Evil are the fourth and fifth episodes of Magical Girl Ore?

Saki attracted the attention of a wannabe hero who claims he’s a cyborg. He’s got a bag over his face, for crying out loud. There is no way he’s actually a cyborg. Or is there? It doesn’t matter in the context of episode four, anyway. Saki and Sakuyo are summoned to the studio by their manager. It seems he’s serious about them becoming a magical idol group, after all. And yes, he wants them transformed for the job.

After an awkward transformation in the women’s bathroom, things seem to be going smoothly until they meet the cyborg. While they chat, the demons attack the studio, causing the girls and the cyborg to spring into action. The studio staff seemed traumatized by the violence of the whole thing but they caught it all on tape. And then Saki meets her worst enemy – the press.

And that’s pretty much episode four. Episode five, on the other hand, was a bit of a mess. It starts off with a reveal that there’s more than one cyborg and that they pretty much all look the same.

It looks like there are five main ones and a random number of lesser versions. At least that’s what it looked like in this episode. They had a mission to stop this world’s version of Godzilla. Unfortunately, the main characters were on break so the cyborgs had to get creative with how they would deal with this monster.

They found out the monster used to be a human being and it was just going back to its workplace. In other words, this monster could destroy all anime forever. If you think about it, that’s not how that would work at all but in this show, I can buy it. The cyborgs finish the former human’s anime and deliver it to the creature only for their efforts to fall short.

Fortunately, our heroes just finished their break and arrive just in time to one-shot the beast. I’d say episode four is about as Evil as a Politician (7). It’s on par with the last few episodes at the very least. But episode five is about as Evil as The Dark Side (6). If I’m honest this is filler, so it’s skippable if you’d rather wait for the main story. I do have to say that this was the first time I’ve seen main characters used as a Dues Ex Machina. It was kind of funny to witness that, at least. 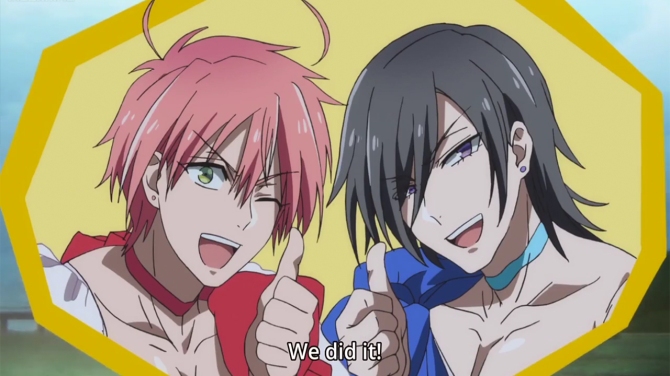 If you’re for a more traditional magical girl series check out our reviews for Cardcaptor Sakura: Clear Card. It’s still almost identical to the original. Well, that’s all I have for you today. Thanks for letting me waste your time, people.

Mahou Shoujo Ore is Simulcast on Crunchyroll, Mondays at 10:00am EST.