Well. That was trippy. Guess it fits the Alice in Wonderland theme.

EvilBob: Okay. First order of business. We can’t possibly get into the first of these episodes without addressing it. Dude. Did you see Sakura’s new hairstyle?!

CVoyage: …The one that looks almost the same as her default?

EvilBob: Yeah! That’s the one!

CVoyage: Well, everyone else took notice, so I guess. Yeah. How about we talk about the real MVP of this episode?

CVoyage: No. Syaoran. At long last, he gets something to do. He’s been somewhat helpful in a few other events, of course, but he’s had a pretty quiet season, for the most part. And his contribution to the episode was awesome.

CVoyage: Hell with the time-stopping spell. I mean, that was cool too. But the characterization. The dude’s supportive and just… generally awesome.

EvilBob: He’s also self-sacrificing. Using his powers took a lot out of him. Just goes to show, he’d pretty much move the world for the girl. It actually shows a lot, how far he’s come since the beginning of the series, as a whole. He didn’t exactly treat her amazingly when they first met. They were pretty much rivals. And not the friendly kind.

CVoyage: Ironically, Sakura hasn’t changed a whole lot since then.

CVoyage: The next episode was… I feel for Sakura, man. Having someone suddenly start up a video of you in a play from grade school is nooot okay. Unless you’re Best Girl.

EvilBob: Even if you are Best Girl, there are some lines you do not cross. Poor Sakura. 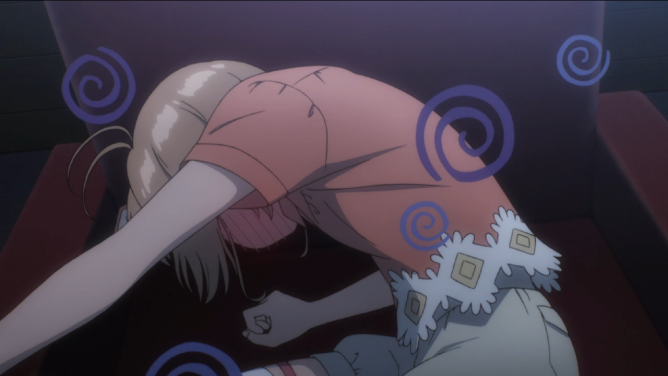 CVoyage: But, uh… let’s be honest, here. This was the “swoon” episode.

CVoyage: The episode in a series with a romantic arc or subplot that’s almost entirely dedicated to one character swooning over another. The other one doesn’t even have to be there. The mere mention of his or her name is enough to set their heart aflutter. EvilBob: Oh. Or, in Sakura’s case, set her face to flush.

EvilBob: I did like it when she turned it around on Tomoyo, though.

CVoyage: …poor Tomoyo. You could see it in her eyes. She was smiling, but she was dead inside. She had the evil aura going on and everything.

EvilBob: Especially when Sakura told her to stay behind when the earthquake interrupted their little viewing party. If you pay close enough attention, you can pinpoint the exact moment when her soul turns black as night.

CVoyage: You went frame-by-frame to figure that one out, did you?

EvilBob: Didn’t have to.

CVoyage: It’s interesting how the episode ends on a cliffhanger. Though it looks like it’s going to be bringing us into another familiar situation as this time we’re getting another Earthquake.

EvilBob: Just more ways for it to lay on the nostalgia factor.

CVoyage: Anyway, both episodes were deeply enjoyable. As possibly unnecessary as it is, Sakura’s swooning over Syaoran and worrying about him in episode 15 is really just adorable. As is her embarrassment over the play. Their relationship is genuinely sweet, and Syaoran’s supporting her in episode 14 was great. There was also an interesting sense of peril and it was amusing seeing Sakura using Snooze to knock people out. Though I do have more than one question as to how in the world people don’t see all the lighting in the room suddenly change when she’s about to do a thing.

CVoyage: I call it Bulls–t, but that works too. I’d also like to know why even still no one who’s aware of all the magical stuff thinks to ask Sakura if something’s up once she starts talking about animal ears and tails.

CVoyage: Bulls–t. Anyway, episode 14 was just great. It gave Syaoran some time to shine and really cemented their relationship even further in a Super Effective way. Episode 15, while delivering some excitement towards the end, was otherwise just a delightful little bit of Easy Viewing.

EvilBob: …such a showoff. Anyway, I’d say both episodes were about as Evil as a Super Villain (10). I loved seeing Syaoran back in action and I’m hoping we’ll see a lot more of that. And Sakura apologizing profusely for putting people to sleep is hilarious. I’m really curious about this next card, though. I wonder if it’s an Earth card or just something that makes strong soundwaves or something like that. We’ll see, I guess.

CVoyage: For another series that’s showing the beginnings of a potentially adorable relationship, check out Wotaku ni Koi wa Muzukashii.

EvilBob: Or you can keep up with Cardcaptor Sakura: Clear Card on Crunchyroll. It Simulcasts there, Saturdays at 8:00pm EST.