With me eventually recapping Tokyo Ghoul:re. It seems like the right time to revisit the first two seasons.  How Evil is Tokyo Ghoul Season 1?

I know what you’re thinking, that’s not fluff. And you would be right it is in no way as safe as what we normally cover on here. I also have to point out I recapped Made in Abyss not too long ago as well. That was a lot worse than this show. Anyway, on to the main topic. It all started with a normal date between to young lovers Kaneki and Rize. Their first date is going great. Kaneki has apparently found the girl of his dreams and Rize seems to like him a lot too.Their date ends up going until it gets late, so Kaneki being the gentleman that he is, decides to walk Rize home. She leads him into the Ghoul infested part of town and tries to have her self a Kaneki happy meal. Thankfully she gets crushed by randomly falling debris from a construction site.

Kaneki wakes up in a hospital sometime later and can’t seem to eat. I Can’t blame him, hospital food sucks. However, when he tries to eat at home he still can’t. He eventually finds that he hungers for human flesh and that he has some of  Rize’s organs inside of him transforming him into a Ghoul. He then has a run in with Touka and with her help and those at the Anteiku Cafe Kaneki starts to live a relatively normal life again. He even gets a job at the cafe and then things get twisted again. When Tsukiyama arrives.

Just a heads up, I hate this guy with a passion. You see Tsukiyama “befriends” Kaneki in hopes of tasting him, yeah and that’s only the beginning.  Once he gets a whiff oh Kaneki’s blood he invites him to dinner and Kaneki is on the menu. If not for a sudden change of heart by Tsukiyama he would’ve died right there. Tsukiyama keeps coming back too. I won’t go into everything he does but he’s bad news in the first season. Speaking of bad news lets move on to the doves. Doves are agents of the Commission of Counter Ghoul or CCG for short. Their seal looks kind of like a dove so the nickname stuck.

Point is doves are trained to hunt ghouls and they don’t care if the ghoul their hunting is innocent. They are kind of like the hunters in RWBY but with little to no moral compass guiding them. And that brings us to the next tragic story.  The doves have been hunting an S Class ghoul known as Jason. He wandered into the home of a ghoul doctor whose family is under the protection of Anteiku. long story short the doves track Jason to the good doctor and start hunting the family actively Anteiku’s territory. Keneki puts his life on the line to help the family but fails to protect the doctor’s wife. The dove responsible for her death used her husbands Kagune (superpower organ) to kill her. Touka driven by revenge starts slaughtering any dove she see’s which leads to the last surviving member of the doctors family walking into a trap. Kaneki helps out Touka by dawning his mask and holding his own against one of the doves. 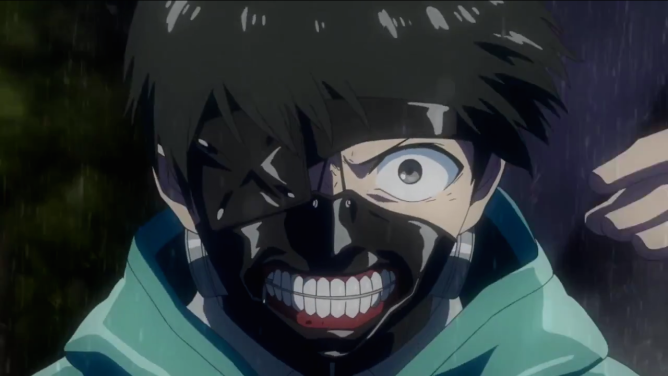 He doesn’t win but Touka and the little girl did manage to beat and kill the dove they were fighting. If the doves and cannibalistic ghouls aren’t bad enough, a terrorist group of super-powered ghouls appears and starts wrecking the doves every chance they get. They take over an entire section of the city by wiping out a dove base. And to make matters Kaneki gets abducted by Jason because he smells like Rize. Guilty by smell? How does that even make sense?

While the Anteiku prepares to rescue him, Kaneki is being tortured by Jason. Jason chops of fingers and toes then allow them to grow back just to do it again. While that’s happening Kaneki is starting to realize how inhuman he really is now. In his pain and suffering, a familiar voice calls out to him Rize. She’s not really in the room with him. I think it’s safe to say that she’s his ghoul half reaching out wanting to take complete control. I do have to say that this part is extremely hard to watch but it’s alos nessisary for Kaneki to realise something he’s been missing. He is a ghoul he can’t fix that but with his powers, he can try to fix the world.

After finally accepting that, he is he undergoes a transformation and kicks the crud out of Jason before eating him. Kaneki grows into someone not to be messed with and this is just season one. I would guess he’s an S Class ghoul judging by how fast he killed Jason. I’d this season is about as Evil as a Killer Robot Army (8). I could banter on about suffering in storytelling and all that, but CVoyage has an interesting article on that subject. Well, that’s all I have for you today. Thanks for letting me waste your time, people.