Aha! So the Butler did it! Just look at him! Totally evil! We knew all along!

CVoyage: I’m beginning to think the creators just wanna launch a cooking show or something.

CVoyage: I’m sure ya would…

EvilBob: Hey, I’ve been taking notes. Some of these recipes look legi-… that was a fat joke.

EvilBob: …Anyway, Akiho decided to pay Sakura a visit, this time. And it was adorable! Akiho is so sweet!

EvilBob: That’s… a good point, actually. I can’t really think of a time that it hasn’t been adorable. But it wasn’t all fun and games, though. Much like today, there was a card capturing afoot. 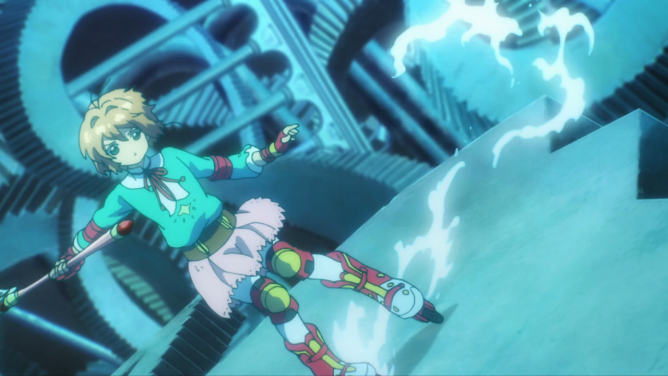 CVoyage: And what captures these were. And yes. I did say “these.” Plural. We got two in one episode again. But this time they were together instead of working separately.

EvilBob: It was kinda cool seeing that, working together, they could even cancel one of her cards.

CVoyage: True, but the really cool stuff was in the animation. I was wondering when we’d get to see the rollerblades again. Amusingly, they even went and used them as kind of a Chekov’s Gun situation. They showed them early in the episode, so you know they just had to come up again later. But yeah. The animation of this sequence was just wonderful. Extremely fluid, pretty, exciting, I’m just really loving the animation of this series.

EvilBob: The way she used the Gravitation Card was pretty sweet too.

CVoyage: Couldn’t she have just… you know… flown? With her shiny new flight card? That she just got a couple episodes ago?

EvilBob: Don’t pull at that thread.

CVoyage: …No. No, I’m gonna pull at that one, actually. Seriously. What the heck?

EvilBob: Missed opportunities aside, the newest episode had some pretty cool things happening in it too. Like the surprising reveal that the butler, Kaito, has magical powers! 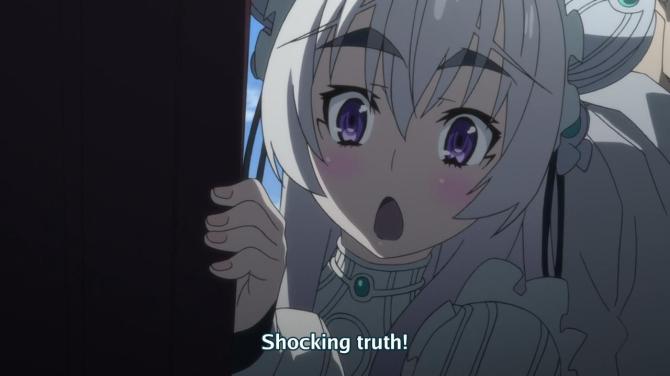 EvilBob: I really wanna know more about the relationship between him and Akiho. I mean, why is a powerful mage watching over someone without powers? Right, dude?

EvilBob: What do you think about all that?

CVoyage: I’m honestly not particularly curious about it. It’ll reveal itself. I’m more intrigued about the mystery behind the cards themselves. Where they’re coming from, why a lot of them seem to be similar to some of the Clow Cards, why the old cards turned clear, etc. Honestly, he’s probably the least engaging part of this whole mystery to me.

EvilBob: Fair enough. I am curious about the cards too. I mean, I’m not sure it’s an evolution of the old ones like we originally theorized. I mean, some of them are similar, but some of them are totally different and new. CVoyage: True. Eh. Only time will tell… and speaking of time, one thing I’m really curious about is the role time plays in all of this. That clock motif is still a big deal, what with the rabbit and the dreams, there’s a lot of symbolism based around that.

EvilBob: Huh. Y’know, I just thought of something.

CVoyage: Oh. Well, that’s dangerous. What is it?

EvilBob: The dreams keep showing them trying to take the staff, right?

EvilBob: What if they can revert her back to a time before she had the book?

CVoyage: Meh. Maybe. I can certainly work out a lot of really complicated stuff based on what we’ve got. For example, the book at Akiho’s place. It’s obviously a reference to Alice in Wonderland. Well, one of the characters in that story is the White Rabbit, famously known for having an oversized pocket watch and fretting over time. A rabbit with a clock. Sound familiar?

EvilBob: Huh… that is a good point.

CVoyage: Are you familiar with the Chinese legend of Chang’e? Well, in that legend the titular character ascended to a lonely palace on the moon where she was accompanied only by… a white rabbit. Seeing any overlap, yet? EvilBob: So… Akiho’s a goddess?

CVoyage: What? No. Well… maybe. Not the point. The point is, even if it’s not intentional, white rabbits actually have a lot of association with both time and the moon. It’s not so much a theory as an interesting connective thread.

EvilBob: Okay… well… what about the dragon in the dream?

CVoyage: Dragons are all over Eastern mythology…

EvilBob: Yeah, but is it also in Alice in Wonderland?

CVoyage: …You familiar with a creature called The Jabberwocky? Basically a big, weird, dragon thing. If all that is genuinely intentional, then this show has actually managed to do a pretty solid job of blending some really cool elements of mythology into the mix to keep it interesting while also sort of creating their own thing. It’s entirely possible I’m overthinking it. But if that’s really what they were doing, then I gotta hand it to ’em. It would be fascinating.

EvilBob: So… many… words.

CVoyage: …that is literally exactly what that should mean! CVoyage: I’d say that episode 10 actually qualifies as Junk Food. Yes, it’s certainly a bit on the slow side, what with over half of it being dedicated to Sakura and Akiho bonding. But once the actual Carcaptor stuff starts happening, it’s fairly exciting and the animation is a delight. Episode 11 is also a little slower, and the capture wasn’t quite as awesome, but it was still good Junk Food fun, a little nostalgic, considering the setting, and topped off with some amusing humor. Like, for example, the new card in it, Reversal, legit stopping the music in the middle of Sakura trying to capture it. I just about fell out of my seat at that one, honestly. Also, it made up for best girl’s absence from episode 10 in spades. But if you wanna see something else magical that’s maybe a little more eventful, check out Mahoutsukai no Yome! It’s winding down now. Only an episode to go for the season and according to his recaps, it’s building towards something special. “Ho? You go an entire review without talking about me even once and then have the nerve to recommend someone ELSE’s show?”