The search for a new member begins. How Evil is Mitsuboshi Colors episode 8?

So, the girls have decided that they need a straight man added to the group. The only problem is they go to a museum to do it. Apparently, they watched something on tv that showed the exhibits coming to life at night and believed that it was true. One of my favorite parts of this episode was when they spotted that giant rocket launcher.

Kotoha suggested that the rocket belonged to Saito. Sacchan wasn’t having any of that noise and decided she would get the rocket to kill Saito instead. Why, is this funny? If they were adults this would be considered terrorism. Anyway, they decide on getting a T-rex.

Okay, they ask for three of them. The answer is no. In the next segment, the girls are trying to win a prize form one of those lottery wheel things. There is one problem, they need to get five tickets to even have a chance at the prize. Why is this a problem? The tickets are supposed to be achievable by buying things at participating shops.

The girls find out that Nonoka’s shop is participating, so they decide to go bug her for tickets. She flat out refuses to give them anything and is holding a grudge from when they helped her sister win that bet awhile back. The girls even offer to help, but Nonoka tells them that she doesn’t need any help and that they would just make a mess. Kotoha comes up with the perfect plan. The girls threaten to help out if they don’t get tickets. 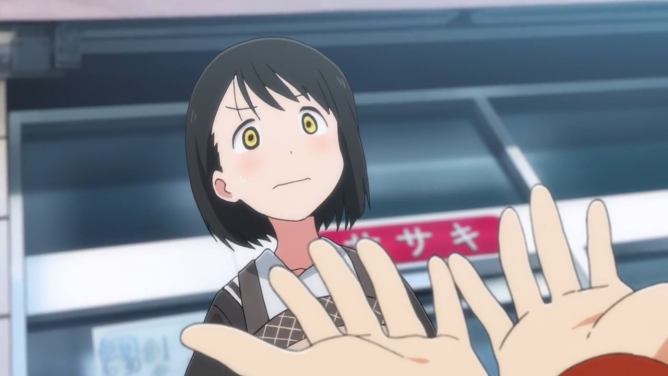 Kotoha’s strategy works earning the girls three of the five tickets. With only two of the tickets remaining the girls set off to find a way to earn more. Luckily for the girls, they find a solution to their problem. They find a nice girl handing out tissues to people passing by. The girls take every last one of them and attempt to trade them for more tickets. I say trade, but they are trying to force the trade on random people.

For some reason, people run away from them. Sacchan goes berserk and attacks a random person with some tissue. Turns out she hit Momoka with it. Momoka agrees to give them the tickets they need as long as they promise to not attack anyone else. The girls agree and with that, they go back to the lottery wheel. Yui spins the thing and wins… more tissue. That didn’t go over well, at all.

This was an entertaining episode, I found it funny how all of their work amounted to nothing this time. Overall I’d say this episode was about as Evil as a Killer Robot Army (8). It’s still consistently funny and adorable. I don’t think this has a chance of anime of the season but if you want one that might be, check out our reviews for Karakai Jozu no Takagi-san. That one is pretty high on our list so far. Well, that’s all I have for you today. Thanks for letting me waste your time, people.

One thought on “Mitsuboshi Colors – Episode 8 Recap (Is It Evil?)”