Well, now we know who’s in charge around here. And it ain’t Arato. 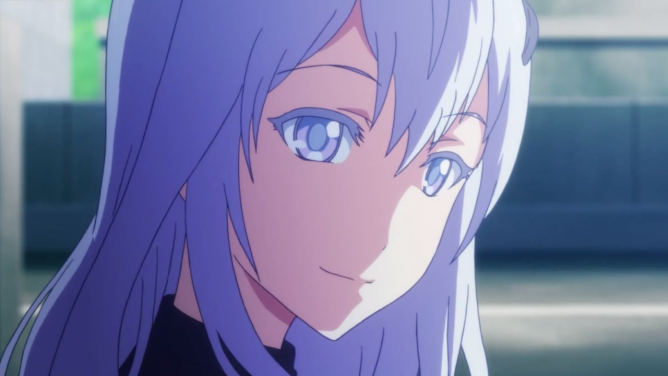 All in all, there were actually some pretty interesting ideas on display, here. Episode 2 may have seemed dominantly pointless. But it introduced a concept that I’m positive will become relatively significant, later. The idea that these androids can more or less subtlely mind control people is a slightly new addition to the overall sub-genre. And it introduces a few more ethical and moral quandaries to the mix.

Another of the angles I’m curious about it the responsibility aspect with Lacia. After all, Arato technically “owns” her. And by the rules of their world, this means he’s responsible for her actions. Yet at the same time, it’s clear she has a will of her own and will do things very much against his instruction. She seemed about ready to completely ignore his pleas to not go through with what would have been her course of action in episode 3. Yet she was still asking him to take responsibility for it. I can’t tell if that honestly means she wouldn’t have done it if he still said no.

But I guess now we won’t know because of what wound up interrupting them. And we’ll come back to that. Regardless, the question of personal responsibility comes into effect, and it’s an angle that matters. Because if machines are people too, they have to be held accountable for the own actions, yes?

If I can say anything particularly negative about episode 2, it was that it dragged a bit. The modeling portion might’ve gone on a bit longer than it needed to. And it wasn’t helped by the repetitive and fairly stiff animation. It made the episode a bit slow. And since the show doesn’t exactly have an abundance of humor or action, it just wasn’t terribly interesting. Furthermore, nothing leading up to the modeling was especially interesting. Episode 2 was dominantly fluff. 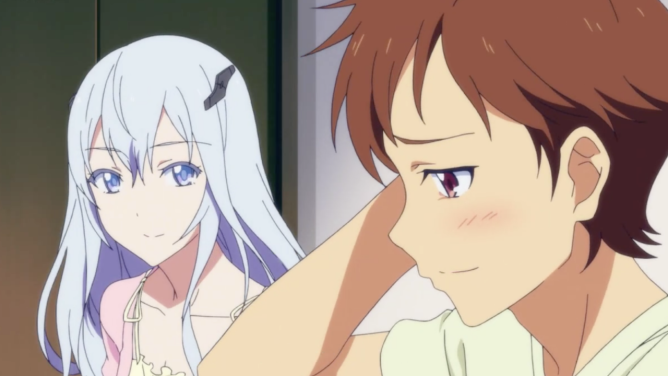 Though this is remedied by episode 3, which episode 2 actually directly leads into. And I liked one of the scenes that it opened on – an interaction between Arato and Lacia. Not exclusively because of how much she was playing him like a fiddle (not maliciously, mind you, though it was funny), but what it said about his interests. Having to share her with all those people sort of put things into perspective for him.

And, of course, later is where Kouka gets involved. You know. “The hot one.” I do like how this episode followed up on the events of the previous one. A guy who’d caused a scene in the last episode wound up kidnapping Lacia… somehow. I can only assume she let herself get captured because Yuka was right there and she didn’t want to risk showing her full capabilities or something. Regardless, Arato gets some help from his kind of annoying friends (and Lacia herself) to track the creep down.

And it’s honestly not even subtle how Lacia’s helping Arato out. But that’s when things get interesting because we get two things out of this that I wasn’t expecting. For one, Arato actually beats the snot out of the guy. And considering how passive he’d been, up to that point, I found that to be incredibly telling. But then Lacia… somehow has a lackey or something, because there was another android waiting in a nearby warehouse with her weird coffin… weapon… thing. It’s obvious she didn’t need Arato’s help. But that made me do a serious double-take.

Then there’s the bit I mentioned earlier, where Lacia asks Arato to take responsibility for her wasting the creep. Which Arato naturally wants nothing to do with. “Luckily,” Kouka shows up and derails things. The resulting action sequence is decent. Nothing impressive or flashy, but it gets the job done. In any event, it wasn’t really an all-out battle, anyway. Kouka was clearly just playing. I find it very strange how Kouka treats Arato, though. She claims that he’s not worthy to be Lacia’s owner. Which implies she’s not against being “owned,” she just doesn’t think that he, specifically, is good enough. It’s an interesting thought, at least.

Aside from that, I’m a bit interested in seeing where things go with Arato’s geekier friend. Whose name I haven’t committed to remembering yet because at the moment he’s still just kind of there. Though the end of this episode, and his interaction with Kouka, promises to remedy this.

And there’s really not much more to say. These episode introduced one especially interesting concept in that funky mind control thing. But everything else was fairly standard. Both episodes actually did their work to produce some good character moments for Arato, however. And I do find Kouka to be a genuinely intriguing character, at least for the time being. Episode 3 definitely elevates episode 2 a bit, as well. So while I’d probably sooner say Episode 2 was leaning on the higher end of Harmlessness, episode 3 was just sweet enough to warrant calling it Junk Food. But if androids aren’t your speed, maybe you prefer your robots a little bigger. If that’s the case, check out my first impression of DARLING in the FRANXX.

What? No. Kouka. Murder for not reading a review is not okay.

Or, if you want to see how all of this develops, much like myself, then feel free to check out Beatless on Amazon Prime. That’s all for me, here, folks. As always, thanks for reading. Keep up the awesome.