Where do I even begin? How Evil is Hakyu Hoshin Engi’s first three episodes?

“A once thrived kingdom, In—now governed by an evil hermit, Dakki, and her party—is in a chaotic status with its people suffering Dakki’s oppressions. Seeing this, The Hermit Band took it seriously and planned a “Hoshin Plan” which is assigned to an apprentice hermit, Daikobo, who gathered partners, captured and sealed all evil hermits, and planned to establish a new kingdom. On the other hand, the strongest and an In- royal hermit, Bunchu, stood up against Daikobo to protect the old kingdom with all his might. Thus, the death battle among invincible hermits begins.” -Crunchyroll

That sounds amazing, right? Don’t worry. It isn’t. What is described here hasn’t really happened yet. That’s supposedly in the future. It starts with a glimpse of the future and takes us back to the beginning of those events. Well, let’s just get this over with. Our protagonist is Taikoubou and he is an immortal hermit apprentice tasked with sealing away all Yokai into the realm of the gods. There is one crucial problem with this – he’s kind of an idiot. Taikoubou has a list of all the yokai he must defeat but shortly after deciding to avoid the strongest one, he encounters him on the spot.

Shinkohyou is this creepy fellow’s name and he controls lightning. His allegiances are kind of confusing. He seems to have sided with the Kitsune-type big bad but he helps Taikoubou more than he helps her. I guess he just likes to play both sides or something like that. In this instance he mops the floor with Taikoubou, leaving him unconscious.

You would think Taikoubou would figure out he needs some backup after that thrashing, but he heads to the big bad’s base anyway. Somewhere around this time, we get some flashbacks of Taikoubou’s past. The big bad killed most of his village when he was human. So it’s basically there to establish his motives. Upon arriving in the capital, Taikoubou runs into this guy.

This is Hiko. He’s kind of the captain of the guard. It’s after he agrees to get Taikoubou a meeting with the king that the stupid gets really strong. Taikoubou plans to enter the palace, talk the King into going to a “party” with him, and kidnap him. Did you follow his logic? Do you see what’s wrong with his plan? Because he thinks it’s brilliant.

As you might’ve suspected, the plan falls apart the minute Dakki, the big bad, opens her mouth. Trying to kidnap a king. That’s something I should try in DND. It’s so crazy it might just work. Anyway, Taikoubou is captured without much effort at all. Dakki then thinks it’s time for a public execution but not for Taikoubou, no. She executes people from his old tribe instead. So Taikoubou is now carrying that event on his conscience for eternity. This show can get dark. Not Made in Abyss dark, but dang. Hiko manages to save Taikoubou but not without all of the prisoners’ deaths. Taikoubou figures out he needs allies to win this fight. So he just needed to get beat twice before he realized that. Then there’s this guy in the next episode.

His name is Nataku and he’s a living weapon. His mother was pregnant for three and a half years. This was not natural at all. It was then that another Hermit appeared with a solution. He employed a device that would save the baby from being a blob of flesh but there was a catch. The baby would forever be a living weapon in the form of a man. And that’s his origin story. 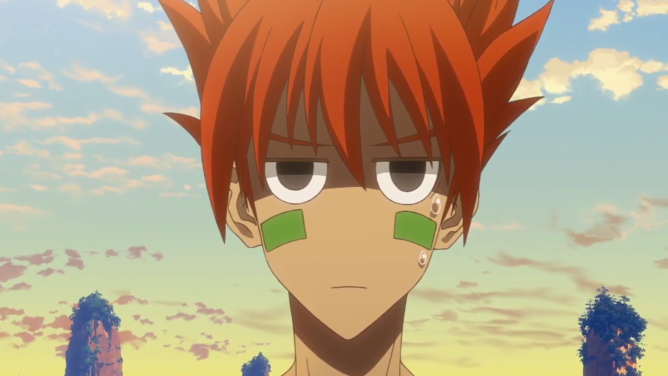 Taikoubou runs into Nataku while he’s trying to murder his own father. Why? Well, because his father destroyed his grave… Okay, let me take this from the top. While Nataku was growing up, his father was afraid of him to the point of resentment. Nataku only had a good relationship with his mom. Anyway, he unknowingly angered a water spirit which was going to kill his mother. Nataku killed the spirit in a single blow. Just to give you an idea of the scale, it was a snake-dragon-looking thing and he was a kid. The spirit king came and demanded justice so Nataku blew his own head off, killing himself to save his mom. How is he still alive? The object that gave him his powers survived his death and with it, he was reincarnated through a flower. Don’t blame me. I didn’t write it. Taikoubou eventually talks him into not killing his father, so it’s all good. Taikoubou seems to have successfully acquired an ally, but the guy who created Nataku shows up and drags him away to train him.

Not an ally until later then? This is something that repeats in the next episode, more on that later. Taikoubou comes to the sudden realization that he’s being followed. With that revelation, he also smells something that sends chills down his spine. The very same perfume worn by Dakki. But Taikoubou finds it’s just a shapeshifter by the name of Youzen.

You thought it was Dakki, But it was I Youzen!

Youzen agreed to join Taikoubou’s quest, but he has to test him first. The first test was to see through the disguise, which Taikoubou passed. The second test is a test of strength. Youzen straight up attacks Taikoubou who just tanks the hit. I guess that’s one way to pass it. You know, he kind of reminds me of Eriol from Cardcaptor Sakura. They both love to test the protagonist and are somewhat trollish in the way they do it.

Anyway, the final challenge was to help refugees get through a border wall, without anyone getting hurt. (CVoyage: Insert topical joke here…) I have to give Taikoubou props on this one. He managed to get Youzen to order the guards to let the civilians through. He did get beat up in the process, but Youzen had no choice but to pass him. Youzen then leaves to perfect his skills.

Okay, that’s… done. Wow, this show is terrible. It had the same problem as Dies Irae, really. A lot of disjointed and sometimes chronologically misplaced side stories that make for a confusing watch. Unlike Dies Irae, this one is so bad it’s funny. Some of the plot points are just stupid fun.

I can’t rate this thing with just my system. This thing is about as evil as a Henchman (5). It’s fun but boy it incompetent. It sits firmly on Guilty Pleasure on CVoyage’s system. It’s bad so bad, but it can be very enjoyable because it’s bad. If you want something that is enjoyable because it’s good to check out my recaps of Mahoutsukai No Yome. It’s got everything you want and more. Well, that’s all I have for you today. Thanks for letting me waste your time, people.

8 thoughts on “Hakyu Hoshin Engi – Catch-Up Recap (Is It Evil?)”