Well, this took longer than expected…

CVoyage: Now that most of the shows have aired, it’s time to lock in what we’re going to be covering, and when you can expect our reviews of them. So here we go.

CVoyage: We’ll start off with the reviews we’re still planning to keep up on a regular basis, breaking the shows down one episode at a time.

EvilBob: Ramen Daisuki Koizumi-san is staying on my episodic list. I’m just thoroughly enjoying it, so far. It’s not amazing, but at least it’s fun. So expect my recaps on those every Thursday.

CVoyage: Toji no Miko is sticking around for me. I fully acknowledge that it’s mainly because I like the sub-genre. But aside from some questionable bits and pieces, it’s managing to occasionally show some real potential. So that’ll be popping up every Friday.

EvilBob: Mitsuboshi Colors. Two words. Banana fight. That is all.

CVoyage: …Like hell am I letting you get away with that.

CVoyage: Screw it. Not worth it. Look forward to that from him on Sundays.

CVoyage: So, Märchen Mädchen fills out the next space on my list, coming out every Thursday. The first episode was rough, but the second one advanced the characters a little and showed us some of the premise at work. It’s probably not going to be a great series, by any means, but it could be pretty enjoyable, overall. EvilBob: Ryuuou no Oshigoto! takes my Monday spot. Against my better judgment, I’ll be keeping up this one. It’s terrible in… certain ways. But I wanna see what’s gonna happen!

CVoyage: So what you’re saying is you’re a masochist.

CVoyage: Hey, everyone has their kink. I won’t judge.

CVoyage: Beatless fills out the last spot on my individual list, with new reviews every Saturday.

EvilBob: What, over Studio Trigger, your lord and savior?

CVoyage: You wanna meet your lord and savior in person?

CVoyage: So just hear me out on this.

CVoyage: That’s it, go stand in the corner.

EvilBob: Corner! Got it! 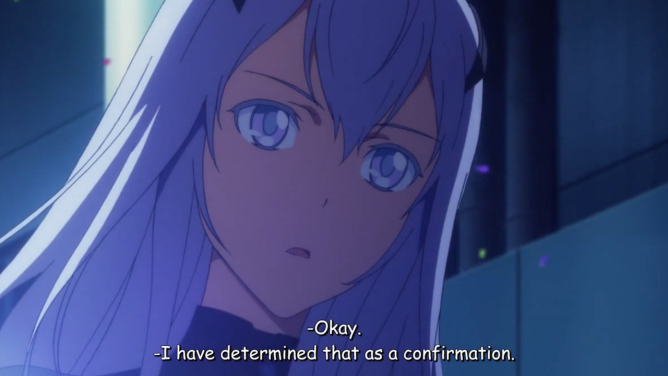 CVoyage: Anyway, I love Studio Trigger… not that big on A-1, but whatever, they can be pretty good. DARLING in the FRANXX looks like it’ll be amazing, for the most part. But it’s also a Mecha anime and given what we have so far, it’s also poised to do a lot of things that annoy me. This could at least just wind up being Chobits with fighting, which wouldn’t be the worst thing in the world. And I’d much rather not have to risk reviewing something in ranty fashion every single week. So, put more plainly, this is here because it’s the “safe” option. And with that being said, all right. Get back in here.

EvilBob: Okay, so… wait. Hakyu Hoshin Engi? Why… is this on my list?

CVoyage: Because I just put it there in your Friday slot.

EvilBob: But… why? I never agreed to-

CVoyage: You wanna get fired?

CVoyage: As for our shared list, first up we’ve got Cardcaptor Sakura: Clear Card, which is all of the nostalgia. Also, and this goes almost without saying, but Tomoyo is best girl.

EvilBob: And if we did drop it, Rila would go all Re:Creators and murder us.

EvilBob: Yeah, you know. Fictional Characters. Coming to the real world and all that.

EvilBob: Oh. So we’re doing the meta thing, then. Got it. So that’ll be every Sunday, for us.

CVoyage: Then there’s the next one on the list which… it’s…

CVoyage: Karakai Jouzu no Takagi-san, is…

EvilBob: I mean, seriously. We just…

CVoyage: We have to keep watching this one.

EvilBob: We couldn’t drop it if we tried! It’s just…

CVoyage: So yeah. Expect that one, every Monday.

EvilBob: And while that one’s definitely funny, it doesn’t come anywhere near being the ridiculously over the top romp that fills the next spot on our list.

CVoyage: It’s none other than the queen of the Junk Food-

EvilBob: Both literally, and in his rating system.

EvilBob: I still have no idea why a show about junk food is this entertaining.

CVoyage: Despite the fact that it’s literally a giant ad. But I’ve said it before. It’s absolutely nothing but bad for me, and I love it.

CVoyage: Next up is the list of things we haven’t exactly dropped. Heck, some we technically haven’t even started. But, for one reason or another, we’ve decided to hold off on episodic reviews and cover them in full at a later date. And with that being said-

EvilBob: First up is Gin no Guardian 2nd Season…

EvilBob: You did this to me…

EvilBob: Saiki Kusuo no Ψ-nan 2nd Season, on the other hand, I did to myself.

EvilBob: Yes. Which is why it’s painful that it’s not out yet where I can watch it.

CVoyage: Oh. Sucks to be you, I guess.

CVoyage: Little bit. Yeah. As for me, I’ve decided to bump down Death March kara Hajimaru Isekai Kyousoukyoku to this category. Not that it’s been “bad,” so far. But at the time it was sharing its time slot with Märchen Mädchen and, given the choice between the two, I just gotta go for the latter. Yes, it’s more “cute girls doing cute things,” but with the promise of some action. And I like the style.

EvilBob: So. Keeping with the theme, I see.

CVoyage: Yeah, I guess. But then… then there’s DARLING in the FRANXX. Yeah, I’ve covered this already. Still going to review it, don’t worry. I’m just gonna do it all at once. Or at least break it into two parts, since, being a Trigger anime, it’s likely gonna have 20+ episodes.

STILL A realistic depiction of Zero Two after doing battle with my expectations.

EvilBob: And then there’s this hot mess. Overlord II. One question. What-

EvilBob: We both watched the first season! We know it was good!

CVoyage: So what is this madness?

EvilBob: It’s exactly that. Madness. Because this is not Overlord. For crying out loud, we even read ahead to see if it’d actually get better. Will it?

CVoyage: Jury’s out. But in the meantime, Overlord: The Lizardmen Chronicles is about to come to a close, so we’ll see. And after we watch the remainder of the series, expect a report on whether this really lives up to the Overlord name.

“This is not going well…”

EvilBob: Speaking of second seasons with a lot to live up to, Nanatsu no Taizai: Imashime no Fukkatsu is next up! But wait! Why aren’t we covering this one in episodic reviews? Well, you see, it’s really quite simple. Chris needs to catch up on season 1.

CVoyage: It’s been a long time. Sue me. Between this and Cardcaptor Sakura: Clear Card, I didn’t feel like there being two shows where I was out of the loop.

EvilBob: Hey, it’s okay gramps. No one can fault you for your memory slipping a bit.

CVoyage: Don’t you have meds to take, old man?

CVoyage: And wrapping up this list is the king of the cute stuff, Miira no Kaikata, coming with a new tag team when the series concludes. So adorable. So friggin’ adorable.

EvilBob: I still want one.

CVoyage: Seriously, though. In a season that’s dominated by cute girls doing cute things, how is this winning that race?

I have to know…

EvilBob: The same way Karakai Jouzu no Takagi-san is winning the season in literally every other category?

CVoyage: …I can’t even argue that.

EvilBob: Next let’s talk about the stuff that’s carrying over from last season. So. Chris. How’s-?

CVoyage: Shut up. That’s how.

EvilBob: But you didn’t hear what I was going to ask, yet.

CVoyage: As if I don’t know… Black Clover‘s still around, and I will be continuing it. We’ll call it morbid curiosity, at this point. With a dash of likely futile optimism. But the last episode was a marked improvement, so maybe it can manage to finally hit its stride… an entire season after airing.

EvilBob: Aw. He stole my thunder…

EvilBob: And last are the things we’re dropping. Not really a lot on this one, honestly.

CVoyage: I’m not gonna be keeping up the Slow Start reviews. Not that the show was especially bad, but it also wasn’t really all that interesting. And I’ve got so much to cover that I really just can’t be bothered with it. I may keep watching it as sort of a cooldown show to relax, every now and then, but that’s it.

EvilBob: And then there’s Hakumei to Mikochi. Also not bad, but… well, if you’ve been paying attention, then you know what our Friday slots have been like, over the past few weeks. So it just made sense to move this one to the wayside. It’s definitely not bad. But it was competing with Miira no Kaikata, Dagashi Kashi 2, and would’ve been the same day as Toji no Miko as well… and now, apparently, Hakyu Hoshin Engi.

EvilBob: With deep appreciation… I am very thankful…

CVoyage: No problem, buddy. And that about rounds our list, yeah?

EvilBob: Basically. That’s pretty much all we’ve got for you today. Thanks for letting us waste your time, people.