CVoyage: Come on, man, she’s not even trying to be subtle, here. Even I wasn’t this dumb in middle school, and I was an idiot. Get your act together. 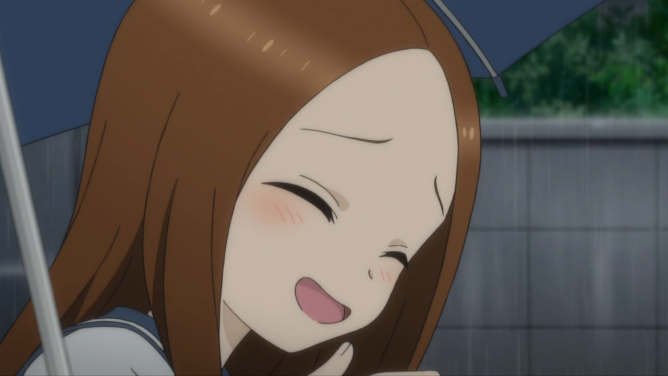 “You’re wasting your time. He’s never gonna get it.”

CVoyage: And cute. Let’s not forget cute. But why? Why is this show so consistently good? I just don’t understand. There are so many other shows with more complicated plots and interesting characters. Why is this still topping our list?!

EvilBob: Because it was done well?

EvilBob: They took one of the most simplistic premises we’ve ever seen and actually made it work. Almost perfectly. Like they took the saying “Keep it simple, stupid,” and ran with it.

CVoyage: You’d know a thing or two about that, wouldn’t ya?

CVoyage: You did walk right into that. Kinda like Nishikata always does. Hey, maybe you two are kindred spirits.

EvilBob: I swear one of these days I shall have my revenge…

EvilBob: Anyway… I do like how the episodes space themselves out. It works well for the comedic timing of the show. Makes sure none of the skits are too long and breaks things up. This time we basically got six minisodes, which works really well for something so simple.

EvilBob: You underestimate my power.

CVoyage: Oh, is that what you call it?

CVoyage: Aw. Touched a nerve. But he’s right. I do like that trio of girls, too. Their interactions are amusing. Especially Sanae, my spirit animal in this show.

EvilBob: Oh, the mean one? That makes sense.

CVoyage: You call it meanness. I call it stating the obvious. Then again, maybe you and Nishikata aren’t kindred spirits. Mina seems to suit you pretty well.

CVoyage: I will say that I’m kind of hoping we’ll get to see the main characters interact with people who aren’t each other a little more, in the future. The main interactions are great and all, but you can tell a lot about a character based on who they interact with. As far as I remember, Takagi hasn’t said two words to any character not named Nishikata in casual conversation. It’d be nice.

EvilBob: How? How will I get my revenge? Maybe I should try-

CVoyage: Conclusion time. Get on it.

EvilBob: Oh. Right. You’re still not off the hook, though!

CVoyage: Aw. He does think about me.

EvilBob: …I have a feeling I shouldn’t let you watch this show anymore.

EvilBob: ANYWAY. This episode continues the trend of earning this show the honor of being as Evil as… a Super Villain (10). If this keeps up, I’m gonna have to create a new rank. It’s just so good. Great comedic timing, great pace on breaking up the segments, still as funny as ever, check it out. Seriously.

CVoyage: Yep. He basically said everything. Like I said, I’m hoping to see a few more flavors of character interaction, here, but aside from that this show is just about immaculate. Simple, but consistently Super Effective at what it does. But if you’d prefer something a bit more… energized, check out EvilBob’s latest review of Ryuuou No Oshigoto! He worked his little heart out on it.

EvilBob: You just insist on messing with me, don’t you?

CVoyage: Why not? It’s easy. And fun.

EvilBob: Mark my words, Chris. Someday, you will get yours.

CVoyage: Yeah, lookin’ forward to it. Anyway if you’d like to catch this one for yourself, Karakai Jozu no Takagi-san is Simulcast on Crunchyroll, Mondays at 11:30am EST. And that’s basically all we’ve got for you today, folks.

CVoyage: As always, thanks for reading. Keep up the awesome…

EvilBob: And Keep it classy.