They changed things up. Interesting. How Evil is Ramen Daisuki Koizumi-san, episode 2?

With the other day’s disappointment, I’m glad this show is consistently silly. That being said, this episode changed things up a little, which was refreshing. The first minisode was a little different. Koizumi didn’t go to a ramen shop. I know, shocking, right? Yuu instead invited her to their world’s McDonalds if you saw the featured image, I think you can guess how that went.

Yuu ends up venting her frustration on Jun and Misa, who agree it wasn’t a good idea to invite Koizumi, seeing how she only likes ramen. Yuu decides to find out if that is true or not and ask Koizumi directly. Koizumi tells Yuu about a time she went to the said McDonald’s analog while she was in Hawaii. Surprisingly, enough she got ramen there too. So yes, she might have a very slight addiction. Yuu asks her if she has ever eaten a burger and she says she got one from a ramen shop when there was a special. They part soon after the conversation, leaving Yuu no closer to becoming friends with Koizumi.

The next part went back to being exactly like the rest of the show so far. Yuu wants to spend time with Koizumi but gets rejected as always. It gets so bad that she grovels and begs just to go with Koizumi. This time, out of pity she seemingly agrees to go along with Yuu. That seemed too easy. There has to be a catch.

At this ramen shop, everyone has their own cubical to eat at. Well, that’s one way for them both to win, sort of.  It’s nice to see this show is using one joke really well. Koizumi, being the savant that she is, obviously only agreed to this knowing they wouldn’t be seated together. All the ways she nopes Yuu are amusing. Well, at least to me. I can’t help but feel sorry for Yuu though. She tried hard this time and still ate alone. 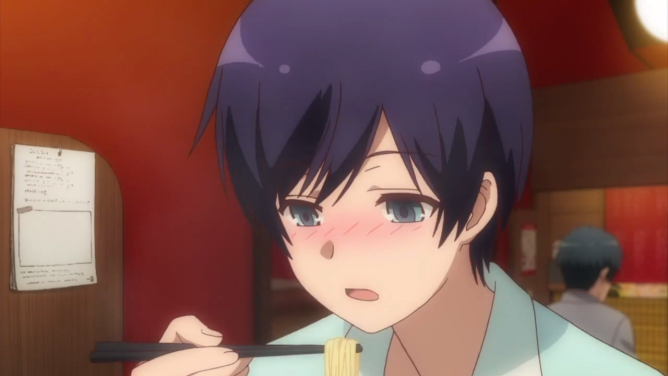 The next part was another departure from what we’ve seen so far too. Yuu is out shopping when she stumbles upon Koizumi passed out from hunger in the street.  Yuu naturally ran to her side to assist. She then proceeds to ask how Koizumi found herself in this situation. Koizumi reveals she forgot that the nearby ramen shop was closed today.

I think someone needs an intervention.  Yuu does the next best thing, she takes Koizumi to her home and cooks a lot of ramen to help her regain her strength.  I don’t think that’s going to fix the problem, but whatever. At least ramen doesn’t give you superpowers in this show. That would be ridiculous. Koizumi feels indebted to Yuu for “saving her,” so she repays the best way she can – ramen coupons.

So far this show isn’t really anything special. I find it enjoyable, which is what my ratings are based on. This show gets me to laugh at people eating food that I enjoy myself. It’s no Dagashi Kashi but it’s not the worst show I’ve ever seen either.  It’s a ramen ad, with a little heart and comedy mixed in. That’s all it really is. It’s not a well-thought-out romantic comedy. It’s all about the ramen and the people that eat it.

With all of that in mind, so far this show is about as evil as a Villian (8). It’s consistent with what it is and I find it almost perfect when it comes to my enjoyment of this show. If you want something with more substance, check out our reviews for Karakai Jozu no Takagi-san, So far it’s the funniest anime this season. And that’s saying something.

5 thoughts on “Ramen Daisuki Koizumi-san – Episode 3 Recap (Is It Evil?)”