Well, at least this one wasn’t as awkward as the first episode. How Evil is Ryuuou No Oshigoto! episode 2?

Okay, that first part wasn’t true. I wanted to try my hand at click bait. Did it work? Anyway, this episode started with a fantasy battle? I’m pretty sure that’s not Shogi. This show has been well, just plain weird. It stages Shogi as an epic battle but only at certain times do we get what I call fantasy mode. Fantasy mode shifts the game into a ridiculous fantasy battle with the pieces being attacks.  So far it’s only been used when the “Knight” guy is playing Yaichi. I have a feeling we will be seeing more of that from other people though.

After Yaichi and Ai win their respected matches Ai asks if she can hold a Shogi study group at Yaichi’s house. Yes I know that’s not what they said in the show, but is basically the same thing. After playing around with the trainees Yanchi evaluates each of them. Then he puts them all through the Shogi training from hell. I wish I were making this up. The poor girls stay up until late night until they all pass out. This leads to another less than savory moment that Ginko of course exploits. She even takes pictures as evidence this time. She also threatens him with a new nickname “Loli King.” 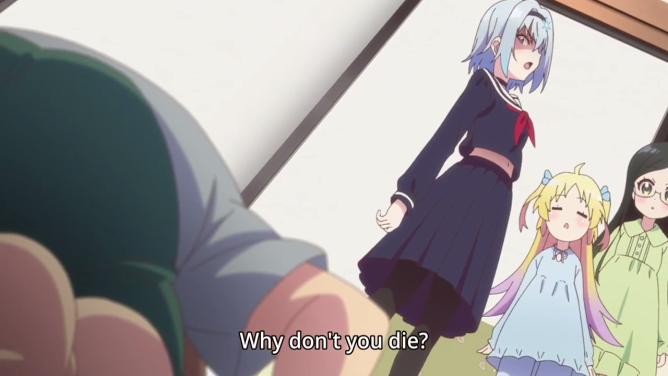 It’s unclear if she will spread the nickname or not. I’m guessing it’s to blackmail him. After whatever that was. Ai and Yaichi are met with two people Ai rather avoid. That’s right, the parents she ran away arrive to retrieve their daughter. Yaichi tries to convince them to let their daughter stay by Ai’s mom isn’t having any of it. So, at least her parents care.

Yaichi eventually convinces her to wait until Ai takes the Shogi exam to see how good her daughter really is. She agrees, but there is a catch. Ai may stay and train with Yaichi only if she can beat her three opponents in the exam. Her logic behind it? If Ai is so good she should be able to pass the test by beating them. It’s pretty clear she thinks Ai can’t do it. That’s just cold.

It seems like this series is the intent of having one nearly cringe-worthy moment per episode. If it does it more than once an episode I may drop it. It’s a fun show but it could go downhill in a hurry if they take it further. I would say this episode is about as evil as Killer Robot Army. It’s enjoyable for some people at least. It’s on the line for me. If you’re looking for something that’s got a little more, action. Check out CVoyage’s reviews of Beatless. From what he’s told me, it has potential. Thanks for letting me waste your time, people.