Did the Civil War just end? If so, that was fast. How Evil is RWBY Volume 5 episode 3?

SOmeone said that this episode was more build up, I disagree. We got the best fight scene post season 2 in this one episode and the end of Blake’s subpar side story. Team RWBY is back finally. This episode starts off with the Bad guys overcoming our heroes. Even the younger Oz is showing signs of weakening. The big guy ends up electrocuting Rin. Oh, you shouldn’t have done that. Nora brings the fight to him in epic fashion until she to is electrocuted. If you can Emagine that was the wrong move. Using the boast she just received Nora sends the big guy flying into a wall and out of the school. This attracts Adam’s attention. Before he can really do anything Blake and her “army” arrive to deal with him. Which they do far easier than it should’ve been. Oh yeah, Weiss is back in action too. Although they revealed Jaune didn’t use his Semblance, he simply used the trick that unlocked his aura to heal her.

Meanwhile in the vault, Cinder, and Raven at each other’s throats in the best battle of this volume. It’s pretty obvious this is where all the funding went. This fight is almost The Last Airbender levels of epic, the show not the movie. They fly, wield giant swords made from ice and fire, and there is barely any talking. It felt like RWBY again. Cinder was eventually defeated, I think she may be dead just look. 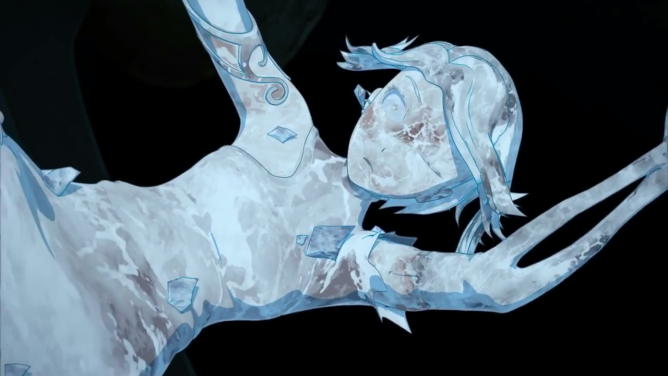 She was falling into a pit frozen like this. Raven doesn’t play around. I know some people will be made she is gone, but Cinder has always been a pawn. Pawns are sacrificed to make bigger plays, Though I doubt her going out like this was part of the plan. I do wonder who will take her place. Salem is bound to have countless other pawns at her disposal.

Anyway back to Raven, she opened the door in the vault. It seemed to lead to another dimension entirely.  Not sure how all that works. For all, I know it could be the realm of the gods or something mythical like that. Raven didn’t get to go through the door though. Yang came to have a talk to mother dearest. 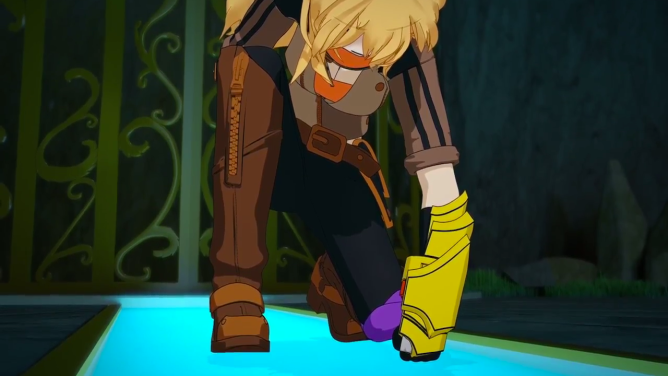 Someone told me the next episode is the last this Volume. They tied up a lot of loose ends this episode, so it is possible. I hope Yang and Blake have a talk and work some things out. Yang is still pissed that she left so we might see some fallout next episode. I would say this episode is about as evil as a Killer Robot Army. This was why I watched RWBY, to begin with.

I may be giving it a higher rating, because of that battle though. It was a fun watch. If you are looking for another fun watch, check out our ongoing reviews for Karakai Jozu no Takagi-san It’s not an action series but it’ll make you smile. Well, that’s all I have for you today. Thanks for letting me waste your time, people.