Why? Why did you throw the feels at me again? How Evil is Mahoutsukai No Yome episode 14?

After Ashen Eye turned Chise into a fox, I thought for sure Elias was going to at least hurt him. Turns out that was just Ashen Eye being mischievous. Elias simply ends up chasing after Chise, who is overwhelmed by the freedom of her new form. Chise keeps running further and further away from Elias’s house. She even states she wants to get away from all of the people.

Elias and Ruth manage to stop her long enough to snap her out of it, reverting her to her human self. Once they get back home, Elias explains the transformation is a curse. He also says she can take that form any time she wishes, so I guess Ashen Eye isn’t a villain after all. After Chise is de-foxed, she gets a visit from the vampire from before.
She has come to get help to save the man she “likes.” Elias delivers the grim news that the man is dying due to the vampire being with him and that there isn’t anything they can do to save him. Chise grants the old man his dying wish – to see the vampire one last time. Spoiler, he knew what she was and still loved her. No, I didn’t cry… (CVoyage: Bulls–t.) Okay, maybe a little. (CVoyage: BULLS–T.) Fine. I cried like a baby. 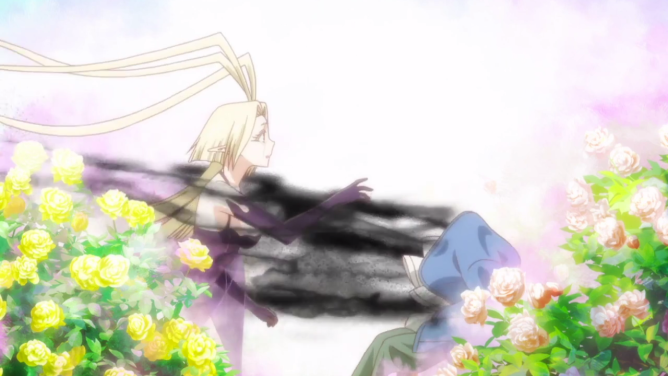 After witnessing the mans last moments, Chise and Elias walk home and Chise is visibly shaken. Elias notices and asks her if she’s sad. She responds yes but she doesn’t know exactly why. He then states that when she cries it makes him uncomfortable. Aw, he’s growing up more and more each episode. Upon returning home they’re greeted by the faerie king.

This is when Chise’s magic-sealing ring shatters into pieces.  I’m not even sure what caused it. This might be because of the way she granted the old man’s wish or it could be the curse. Either way, Chise is not in good shape afterword.

This went a darker direction than most of the episodes. I’m sure it won’t stay this dark, but I’m curious to how long it’ll be this way. Overall this episode was about as evil as a Villian. If this is too dark for you, maybe you want some humor instead. Why not check out our tag team review for the Dagashi Kashi 2 premiere. No chance of that getting too dark. At all. Well, that’s all I have for you today. Thanks for letting me waste your time, people.