Yet another reason to buy this game.

Nintendo has done it again. Yet another free DLC for one of their games. I mean EA finally caught on with the new Battle Front 2 (Kind of), but Nintendo had been doing this day one with it’s DLC. This one is sort of a crossover too. For those who are unaware of what Mario + Rabbids Kingdom Battle is, its a turn-based tactical game based on the Mario universe with the addition 0f Ubisoft’s Rabbids.

The thing is, I haven’t seen them add a new mode before.  This game only had single player. The new mode comes out tomorrow. I didn’t even get a notification it was coming. I guess it was intended to be a surprise? 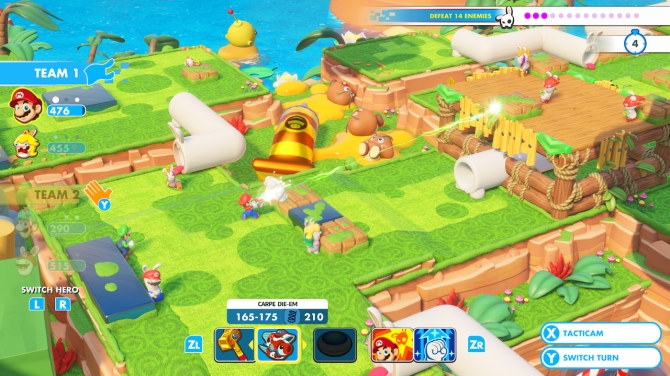 Either way, I’m always happy when something unexpected happens. It’s kind of like getting a present from someone you are sure you don’t know, but everyone says it’s cool so against your better judgment you open it. And then the gift is amazing.

The Versus mode will allow players on the same system to do battle with three characters each. It’s meant to be played in quick sessions. Sounds like it would be great for the holidays. Er… maybe that seemed a little too much like an ad. There’s only one other game (I can think of) that added multiplayer after launch – FFXV. That one was passable. It had its own story, at least.

I wonder if they plan on expanding this mode in the future. They could take it online once their service is established. They could even expand it to where there can be longer battles with more characters. I think that might get bundled with story paid DLC if they ever did that, and it would still be cheaper than most of the competition.

Well, anyway, if you own the game, you’ll get the new mode tomorrow. If you’re like me you are saving your money for other things and are praying someone reads your mind and gets the game for you. The struggle is real. If you like the whole tactical turn-based genre, Chris wrote a great article on Fire Emblem Fates. You should go check it out.

Well, that’s all I have for you today. Thank’s for letting me waste your time, people.