That was awkward, in a good way. How evil is Net-juu No Susume episode 9?

After the last episode, I was wondering what would keep these two apart. Now I know.
Moriko doesn’t see herself as worthy of Yuuta. This was highlighted a few times in this episode and it makes perfect sense for her character. This episode started with Moriko in Yuuta’s shower, setting up for how she got there, to begin with. It quickly went back to where the last episode left off and lets it play out.

As expected, Moriko reacted to the news in hilariously awkward fashion. This lead to an apology competition. Moriko’s insecurity yields a response that Yuuta misinterpreted as a rejection. Luckily, good old Homare gets involved. You see, Yuuta got drunk. So drunk that he spilled the beans on getting “rejected.” Homare set a new plan into motion, which looked a lot like what he did before and… well just look.

I said it before and I’ll say it again. Homare is an evil genius. He might even be my favorite character, right now. He keeps setting events like this up just to get them together. Why? Because he’s a good friend apparently. That or he’s just bored. He does show off Godly levels of trolling while doing it. I’m sure he’ll be there even after these two become a thing.

Speaking of Moriko and Yuuta, Moriko voiced her opinion of herself to Yuuta, which was a nice look at her perspective on all this. Yuuta reassured her he doesn’t see her the way she sees herself. While they talked it started to rain, so they ended up in Yuuta’s place. Yes, it was all very awkward, but I’m pretty sure Homare planned this all along. 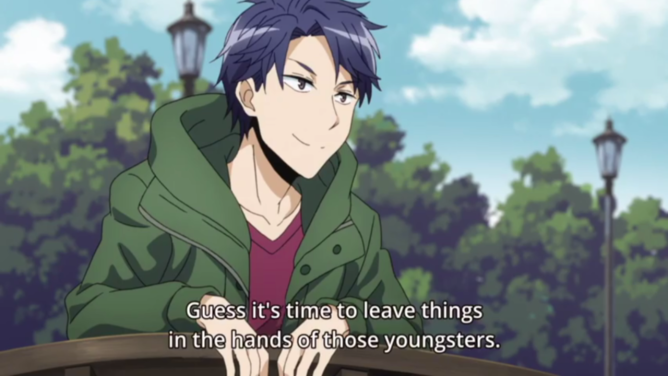 I do wonder about Homare’s motives. I know he’s being a good friend, but is there something more to his actions?  Maybe Yuuta helped him with something so he’s doing this to repay a favor? (Chris: Bob, there is literally only one more episode of this. I doubt we’re going to get any further “hidden depths” out of side characters, at this point. Wrap it up.) Right. Well, whatever his reasons, he’s a cool guy. This episode was about as evil as a Super Villian. This is on my list of favorites, this season, and I would highly recommend it so far. Speaking of one of my favorites, check out Inuyashiki. It’s got a pretty strong run too.

That’s all I have for you today. Thanks for letting me waste your time, people.