What’s Hiro going to do next, free all the criminals? How evil is Inuyashiki episode 8?

If you remember my recap of episode 7, then my prediction of nothing good coming from the SWAT team arriving should sound familiar. Well, looks like I was spot on when I said that. It played out almost exactly as last time only this time they actually shot him. Also, Hiro did kill a few of them this time. More on that later.

I was so afraid that something would happen to the girl and her grandmother when the SWAT team entered the house and for good reason. It appears that the SWAT team either hit or shot both of them while making their way to Hiro. As you can imagine, that didn’t go well… for the cops. 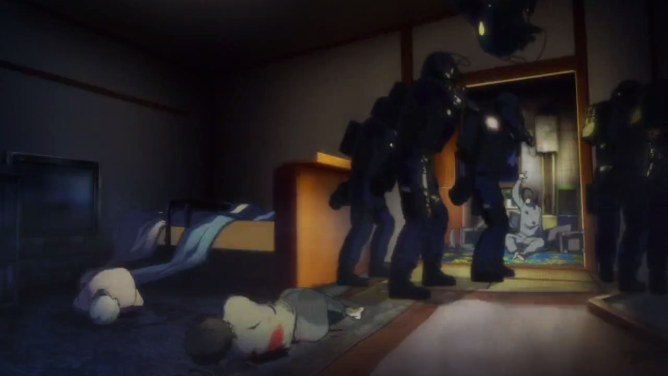 Hiro didn’t stop with the SWAT team either. He walked up to the station and killed everyone except one guy. He left one alive to witness the destruction of the entire police force. See? I knew he was a nice guy. And he even said he wasn’t done yet. I can’t try to predict him, right now. I wouldn’t be surprised if he does release the criminals.

But enough about Hiro. There was another interesting development with, you know, the development title character. Inuyashiki’s daughter followed him. She saw him talking with Ando and her imagination went pretty wild on her. She went as far as to think they might be lovers. Does she really know her own father? She eventually saw her father fly and had the reaction you’d expect.

I’m a little surprised it took this long for Inuyashiki’s family to start catching on. I mean, he’s out later than he was before and they didn’t think anything of it. He still maintains the normal old boring routine, but it is about time someone in his family found out. I would say this episode was about as evil as a Killer Robot Army. I hope the cycle of hurting Hiro doesn’t continue. They need to lay off even for a little bit. If you like to read, we got lots of articles. Why not give them a shot.

Well, that’s all I have for you today. Thanks for letting me waste your time, people.

One thought on “Inuyashiki – Episode 8 Recap (Is It Evil?)”