So this week’s episode finally got the ball rolling as Asta, Noelle, and Magna at long last go on their first mission. One thing I’ll note is once again, the episode really begins with Asta’s yelling. At this point, I’ve become numb to it. But at least the yelling actually makes sense for a change, as you come to see once the episode actually begins, proper. It isn’t especially funny or anything, like last time where the screaming seemed like the series for once being a little self-aware, but at least he isn’t just shouting at the top of his lungs for its own sake. Now, remember. I am not hard to please. I have the patience to tolerate this series taking its time to set things up. What I don’t have the patience for is when that setup feels like time being wasted. The last episode was just wasting time. The episode before that actually utilized its time. So which side of things does this episode fall into?

The episode gives us a little bit of Magna’s background. Actually, I wouldn’t be surprised if that’s basically all we really get in terms of backstory out of him. Actually, for most of the characters, I’m not expecting anything particularly intriguing. Really, I don’t generally mind that. A background can be incredibly simple as long as the character’s actions reflect it and whatever development they undergo throughout the course of the story. In fact, I usually prefer that they not be particularly complicated, because while it does help inform the character, many creators (myself included) often have trouble making sure the character’s actions stay true to the entirety of that long and complex backstory. Magna just starting out as sort of a punk who eventually got straightened out suits his aesthetic, his attitude, and his actions, so it’s perfectly fine.

After that, we get the payoff to what we saw at the end of the last episode. The town that they’re doing this mission for is under attack. So our heroes leap in to help. They fight their way through the thick mist… and in Asta’s case, I do mean that literally. Complete with-

-shouting. Then they save the citizens from being turned into icy pin-cushions. Needless to say, Magna… is less than pleased. And what follows is yet another moment of Asta just doing the (obvious) awesome thing by saving everyone from a killer attack. Then what? Then a fight. The first real fight of the entire blasted series. The first fight where there is no One-Hit KO.

Now here’s another thing about this series. They made a big deal (kind of) out of what it means to be a Magic Knight. As vague a title as it is, it’s fairly obvious what they’re supposed to be. They’re the magical equivalent of a paladin. They protect and serve. They fight evil and stand up for the weak. They help people with tasks big and small. Put simply, they’re “heroes.” And I mean that in both the fantastical and the mundane sense.

Based on that, one thing I’ve really been wanting to hurry up and get to in this series is these guys actually doing something, anything, heroic. I’m not counting Asta saving Yuno because that was honestly an accident. I’m not counting the not-tournament arc because that wasn’t so much heroism as it was dominantly about self-interest. I’m not really counting Asta saving Noelle because Yami literally used Asta as a weapon, not a person, by throwing him at her. This is the first episode where the guys are, of their own volition, no less, stepping up and doing something heroic. And I appreciate that. Specifically, I like seeing just where Magna’s conviction comes from, even if it’s a little silly. And the villain clearly gains no favor with Asta, given how he talks about the villagers. Of course, it’s all too familiar a mentality to Asta, which is reinforced with a (thankfully) brief flashback that I’m not entirely certain we needed, but it was harmless, nonetheless. Point is, Asta’s pissed. 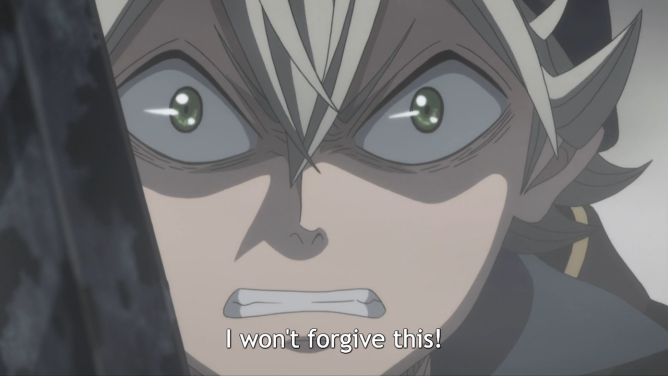 The fight, itself, isn’t over. And what we do get isn’t especially visually impressive. But it does its job. It establishes a sense of peril, not so much for the good guys (though they are very much in danger), but for the villagers. They’re just coming down from their actual mission and on top of fighting, they have to worry about defending the villagers from what I’m just gonna call “Icy Hellzone Grenade.” It basically boils down to a war of attrition. And that’s where Noelle comes in.

Noelle is still grappling with the whole “royalty” thing. And the end of the episode sees fit to give her a moment where she can shine a bit. Which is good. I’m glad they didn’t go on and make her entirely useless, early on, having to develop her powers over the course of a painfully slow character arc (like some series I won’t name). She actually makes progress fairly quickly, which I can appreciate. It’s the slightest bit hammy, but the revelation that helps her realize this power is something I’m glad to see out of her. It may not really change her overall attitude, but at least her outlook matures a bit, as we see.

I do think the episode’s primary failing is the villain. He’s just a fairly stock elitist jerk who’s trying to kill everyone in the village because… well… they don’t have the magical power to defend themselves. So put more plainly, he’s one of those “magical master race” people. And considering his posse of backup singers, it really wouldn’t be a stretch to call him this show’s equivalent of a Nazi. The main issue I really had was just the execution. He was… kind of boring. He sat/stood there, talked down to everyone, barely moved when it came to attacking… he just wasn’t very engaging. But my other thing was his insistence on not wasting time. If he cared so much about that, then why’d he basically drop what he was doing to explain himself to Asta and the others? My point is that if a villain is going to have a stupidly high opinion of themselves, then they need to be able to back it up. 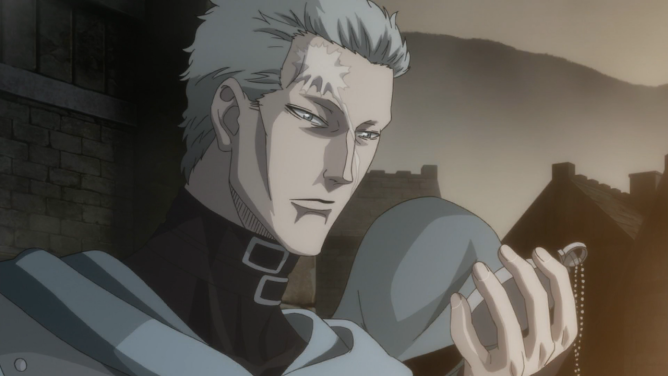 Overall, I think the episode was actually decently solid. Not a lot happened, but there’s finally the sense of things going forward. The characters have their good moments, and there’s a little bit of development for a couple of them as well. The pause in the middle of the episode for the villain to monologue some world building was a little awkward, and the villain himself was a little weak in terms of execution. But I think the episode is genuinely enjoyable for what it’s worth, and something I can comfortably call Junk Food. But if you’re just worn out on this show by now (it has been dragging along for a while, I admit), we have plenty of other recaps and reviews for you to check out.

Or, if you think the show may finally be getting its act together, Black Clover is Simulcast on Crunchyroll, Tuesdays at 6:25am EST