I will be honest. I was absolutely not expecting that.

Disclaimer: I have not read any of the source material or watched the previous adaptations. You will find no comparisons to them, here.

“The world is not beautiful, therefore it is.” A story about Kino, who travels around the world with nothing but her guns for protection and talking motorcycle Hermes. Kino travels to many mystical worlds, each with its unique customs and people, and learns about the world through their stories, at times conjuring humor and inspiration or other times piercing cynicism. However, Kino has her own custom, to stay no longer than three days in every town without exception, as it is enough time to learn almost everything important about the place while still leaving time to explore new lands. (Crunchyroll)

I knew not what to expect, going into this, actually. All I knew was that I’ve seen images from the light novels, the earlier adaptations, and so-on. Yet I never actually invested any time into the series. People were obviously excited about it, and I think I can see why. What this seems to have boiled down to is a pretty overall chill vibe that has a lot of strong, self-reflective elements and through provoking ideas.

This episode managed to do something that’s honestly pretty rare. It surprised me. I’m not a person who puts a lot of stock in being surprised. I’ve absorbed enough by now that it’s unfathomably difficult to do.

Usually, when a series does something that surprises me, these days, there wasn’t ultimately a point to it. For example, characters dying in an anime or game that ultimately had no reason to die (Fill in your own example. It happens a lot), other than to make me feel sad. See, the thing is… that doesn’t have the effect the creators want it to have on me. That pisses me off. And not at the character or circumstance that killed them. No. It pisses me off at the creators. But this didn’t do that.

Without spoiling what exactly happens, what this managed to do was establish a certain expectation based on the reaction they probably knew I’d have, then went in a direction I hadn’t anticipated. Part of me even feels like it was for the sake of making a point. Or making me realize something about myself. It caused me to actually think inward in a way, and I genuinely love it when an anime can have that effect on me. 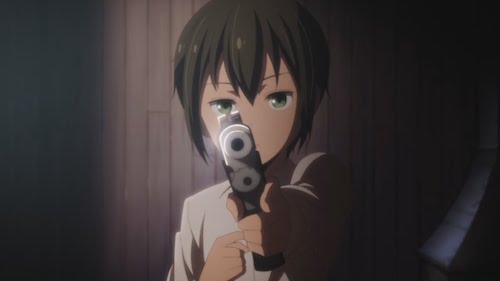 The animation is nice, even pretty to look at. It, the voice acting, and sound direction all do an excellent job at setting up the atmosphere. The atmosphere, I can tell, is a pretty significant part of this experience, so I have to give all these parts their credit for getting me mentally where it wanted me to be. It was chill when it wanted me to relax, and tense when it wanted me to feel like I should be alert. And just like that, I was invested.

As for the characters, there are only two consistent ones at the moment. Kino, the title character, and her “motorrad” partner, Hermes. They’re likable enough, for certain. I think the main draw for Kino is the relatability. She has thoughts that she’s not exactly the best person. They’re thoughts that honestly any decent human being would have. Humans can be selfish. Humans can be stupid. Humans err. But she sees that as something that makes it all the more enjoyable to see the beauty in the actions of others. Because for all their faults, people are capable of truly wonderful things. And knowing people aren’t perfect, makes one appreciate those wonderful things all the more. It’s a very down-to-earth, relatable perspective.

If there is one real criticism I have, it’s that the setup was a little ham-fisted and clunky. That being said, this is obviously some form of parallel world where a lot of what we’d expect out of society would likely be different. Still, there’s a conversation fairly early on that had me rolling my eyes a little. I get why it was there, but I’m sure it could’ve been at least a little more subtle.

There is the question of how a series can be a “Slice of Life” with a format like this. But honestly, that genre doesn’t necessarily need to be about people living in some apartment complex together or attending the same school, or what have you. As long as the focus is on the daily lives of the core characters, and said daily life doesn’t involve zombies, regular fights with evil monsters, or giant robot mech suits, you’ve basically got it. Then, of course, there is the balance of plot and story. Typically a Slice of Life will fall more towards the Story side of the scale if anything focusing more on character growth and introspection. But more often than not it’ll land in the middle. This is opposed to more plot-heavy stories, which tend to involve a greater emphasis on events, which only get more elaborate, the more down that side of the scale you go.

Kino is a Slice of Life because it doesn’t lean far on either side of the scale. Not only does it revolve around Kino’s own life, but through her, the audience experiences the daily lives of the people in the various lands she visits.

It’s strange, though. Ordinarily, I’m not really one for the genre. I typically just find it a little boring on one hand, or overly dramatic on the other. If nothing else, I usually prefer my Slice of Life stories to blend with Comedy. But while this isn’t a Comedy by any definition, in all I think I’ll enjoy this series. If it continues to pose intriguing ideas, it should be well worth it.

Kino no Tabi: The Beautiful World is Simulcast on Crunchyroll, Fridays at 11:30am EDT