The great thing about anime is being able to see all sorts of different quirky characters in amazing settings. Be it the troublemaker ninja that dreams of becoming Hokage, to the cry-baby girl who meets a talking black cat that changes her life forever, you can count on anime to have something for just about anyone. You can have very outgoing characters who never hesitate to jump into a dangerous situation or the coward character that would much rather run away when someone gives them the wrong look. At the end of the day the outgoing character and the coward can end up going down the same path without a second thought because they share a common goal. Which usually consists in the survival of themselves or someone they care about.

A rubber man who aims to be the Pirate King by finding the legendary treasure One Piece. Luffy is strong at the beginning of the series and knows it. Fearless and always hungry, Luffy is almost always eager for a fight. Not one to shy away from bloodshed and violence, he also knows his limits and isn’t above running away when the time calls for it. But even though he is able of going head to head with some of the strongest opponents, (like Crocodile), Luffy has tasted bitter defeat more than once.

A good example would be during the Sabaody Archipielago Arc. During this arc the Straw Hats are forced to fight a Pacifista (Cyborg/Human Weapon). The cyborg was able to withstand their most powerful attacks and it took all of the straw hats fighting together to defeat it. After that encounter they were all injured and exhausted and were not able to put up a fight when Sentomaru arrived with another Pacifista. No matter how much they tried, they weren’t able to defeat or escape from their new powerful enemies and were utterly defeated and separated.

After the two-year time-skip, Luffy was able to master different techniques and abilities. One of them being Haki. One of the Haki Luffy was able to master was Busoshoku Haki. This type of Haki allows Luffy to use his life force to create a type of invisible armor around his body. This allows him to protect his body from attacks that would usually cause him harm. Mixing that with his Gear Second (a technique that enhances his strength and mobility) he is able to create more powerful attacks.

As seen when Luffy made his way to meet up with his crew after the time-skip and encountered a Pacifista. This time Luffy was able to defeat one on his own with a single Gear Second/Haki induced Punch. Unlike before the time-skip where he needed the help of his crew members to defeat it.

A cowardly and no talented middle schooler is one day told by the baby, Reborn, that he will be his tutor and make him capable for his future role as the tenth generation Boss of the powerful Mafia Vongola Famiglia.

As the series progressed, Tsuna was able to overcome many obstacles in his life by being hit in the head with the Dying Will Bullet. When hit with the bullet he dies and if he feels regret he goes into Dying Will Mode, which basically means that he looses all of his clothes, except his underwear, and is able to do things he normally wouldn’t be able to. But that is only possible if he feels regret when hit with the bullet, if not then he will die.

It wasn’t until he was faced with his first real dangerous opponent that just entering into Dying Will Mode wouldn’t cut it. His opponent, Rokudo Mukuro, wasn’t another classmate or someone from the mafia that wanted to test his skill. Mukuro was out to take control over his body and effectively have his revenge against the Mafia. Mukuro wasn’t above killing or controlling others to get what he wanted, even his own allies.

When Tsuna finally confronted the real Mukuro, he knew he wouldn’t be able to defeat him, but he still wanted to save his friends. This was one of the first times that Tsuna actually wanted to win against someone, willing to stay and fight instead of running away. His will made Leon (Reborn’s chameleon able to create special weapons) produce a special bullet and mittens for him. When Reborn shot him with the new bullet, Tsuna’s gloves transformed into X-Gloves and he entered Hyper Dying Will Mode. 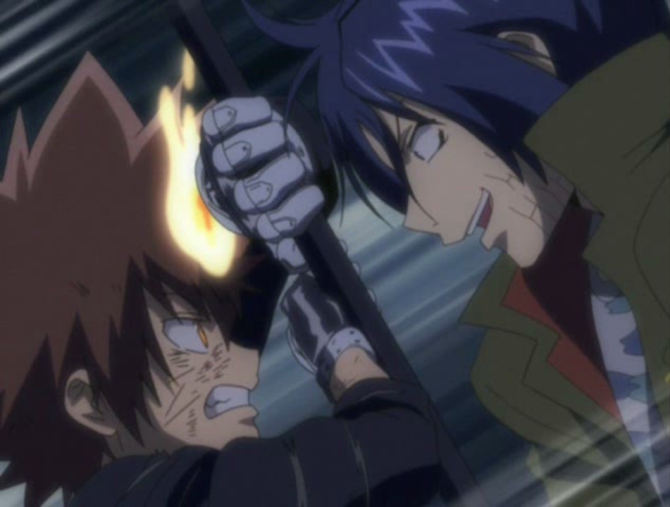 Apart from keeping all his clothes on, unlike in Dying Will Mode, the difference between the two modes is that his internal limiters are removed instead of his external limiters. This awakens the users hidden awareness, being able to fight calmly and stay in control.

It is in this mode and with his Dying Will Flames that Tsuna is able to overcome and purify Mukuro’s aura, leaving Mukuro defeated and unconscious. If Tsuna had not been able to enter Hyper Dying Will mode, it was very likely that Mukuro would have been able to do as he wished, which was taking control of every important being. With this he hoped to create a World War, after having destroyed the Mafia World.

Ganta, a teenage boy, was the only survivor of his class’ massacre and as such was wrongfully accused and convicted as the killer. Now sentenced to death row, he is to pass his remaining days in the private prison called Deadman Wonderland, where he effectively reunites with his childhood friend, Shiro. But after his Deadman powers, blood manipulating ability called Branch of Sin are revealed, he is transferred to G Ward, a secret part of the prison where Deadmen are forced to fight for the amusement of the Warden and others.

The first attack that Ganta is able to use most of the time is what fellow Deadman Senji dubs as the Ganta Gun. The Ganta Gun allows him to shoot the blood out of his body, like bullets. This attack, while effective if it hits the target, is also an attack that can backfire Ganta if he misses his target. Why? Because unlike other Branches of Sin, like Senji’s blade-like scythes that can retract into his body after use, Ganta’s attack makes him loose the blood. Thus, he is always at risk of anemia, which can effectively get him killed if he succumbs to it in middle of a battle.

When Ganta encountered the leader of the Undertakers, Azuma, who carried guitar-like weapon called worm eaters, that can cancel Branches of Sin, Ganta’s Ganta Gun was rendered useless. Fortunately for Ganta, he was saved by Shiro crashing down from the ceiling and destroying Azuma’s guitars.

It wasn’t until Ganta was able to use his Ganbare Gun that he was finally able to defeat Azuma, not killing him but leaving him in a coma. His Ganbare Gun is a much powerful and faster version of the Ganta Gun, which makes shiny reddish lines appear across Ganta’s body when activated. This bullet expands and explodes when it makes contact with its target. 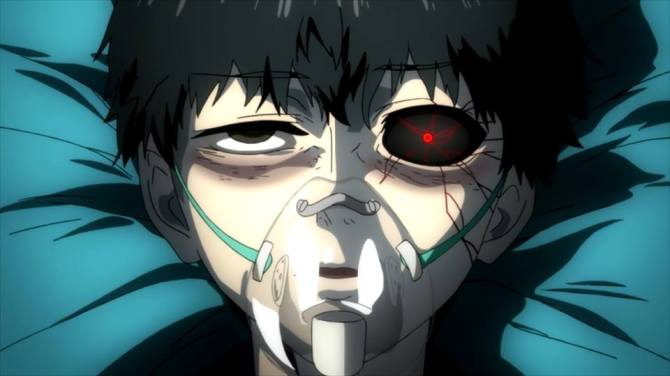 A world were human-like creatures (Ghouls) live along side humans, Kaneki Ken was a shy, unsuspecting human who after a “freak accident” was turned into a half-human/half-ghoul hybrid. As a hybrid, Kaneki is no longer able to process and digest human food and has to eat what all other ghouls eat to survive, which is human flesh. He now has to learn to live with his new abilities and urges while pretending to still be a normal human or risk being hunted by ghoul investigators and fellow ghouls alike.

As Kaneki came to terms with his new life, he was able to fight and survive against powerful ghouls, like Tsukushima Shuu and Ghoul Investigators like, Koutarou Amon. He trained with Touka and Yomo in how to properly use his kagune (a ghoul’s predatory organ, like a claw). But even though Kaneki had fought and won, he still had trouble accepting his ghoul side and would sometimes succumb to his hallucinations of Rize (his ghoul organ donor) who tempts him to give into his ghoul side and eat human flesh.

When Yakumo Oomori (also known as Yamori or Jason) ambushed Kaneki and his friends, Kaneki was unable to defeat Yamori, even with Touka’s interference. Thus he was captured by Yamori and his group.

While captured, Yamori made it his mission to torture Kaneki, wanting to break him physically and mentally. Since Yamori wasn’t able to break Kaneki with physical torture alone, he forced Kaneki, to choose between a couple, who would live and who would die. Kaneki wasn’t able to make a choice, even though one of them was willing to die for the other, Kaneki still didn’t choose. This prompted Yamori to kill them both, thus breaking Kaneki.

Unfortunately for Yamori, this allowed Kaneki to finally accept his ghoul side. By accepting his ghoul side, Kaneki defeated Yamori by no longer being restrained by his human tendencies. He was able to bite Yamori to escape his bindings and fight and feed on Yamori’s kagune. Effectively defeating Yamori, leaving him helpless in his “hobby” room and Kaneki was able to escape with his life. If it hadn’t been for Kaneki accepting his ghoul side he would have been killed by Yamori or rendered completely broken, a shell of his former self.

In the end these four different characters had to “power up” one way or another to survive. Luffy had to up his already capable and powerful arsenal to survive in the more dangerous world he was plunging into. Tsuna decided to stop running away and fight for his friends and himself. Ganta’s journey for revenge had led him to constantly be bettering himself in order to make it to the next day. And Kaneki had to come to terms with his new reality of being a half-ghoul and all the things it came with. If not, they would have been captured, killed or forced to watch someone they cared for be hurt or killed. And then there wouldn’t be a good anime. Well, thanks for reading this.

Remember to have fun and take cute cat pics!